The ActiveState Platform is a cloud-based build tool for Python. It provides build automation for:

Because ActiveState Platform is a server-side build automation tool, there’s no need for:

With local builds, you’ll also need to spend time resolving conflicts between packages, their dependencies, as well as any operating-system-level dependencies. And of course, you’ll need expertise in both Python and the operating system you’re building for in order to resolve the inevitable issues that arise. 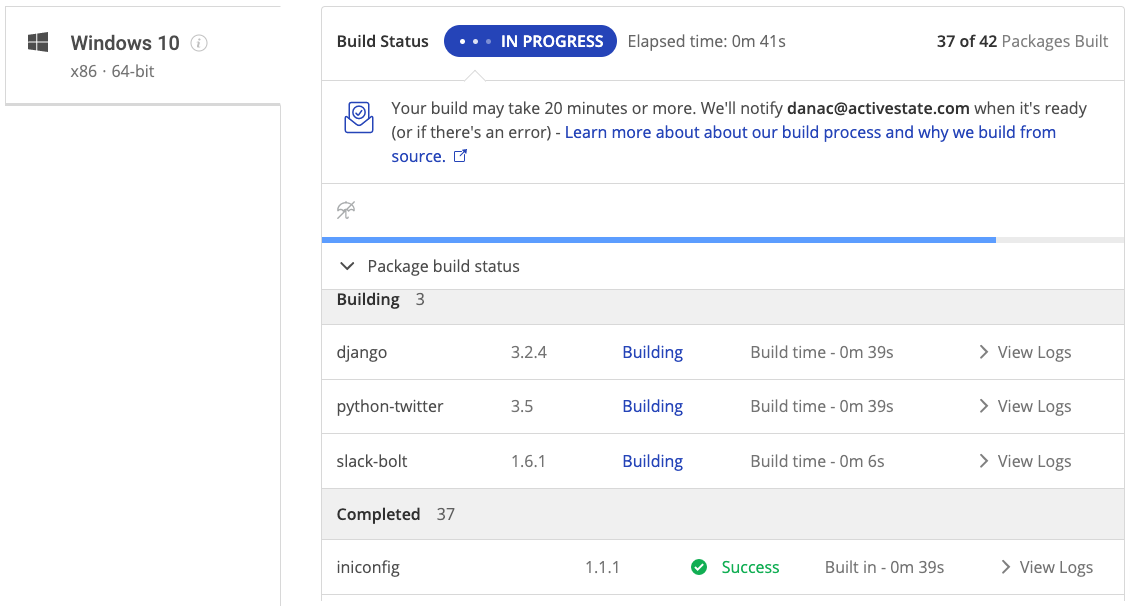 And since building and packaging are automatically done for you, there’s no need for either language or operating system expertise.

Ready to see for yourself? You can try the ActiveState Platform by signing up for a free account using your email or GitHub credentials. Or sign up for a free demo and let us show you how you can automatically build Python from source code in minutes.

Does Python need a build tool?

When it comes to the need for a Python build tool, you have two choices:

The easiest way to build Python is to use the ActiveState Platform, which will automatically build packages (including linked C libraries), resolve dependencies, and then package your environment for deployment on Windows, Linux and Mac. Create a free account to try it out.

What is a build tool in Python?

In general, build tools are programs that automate the creation of executable applications from source code. When working with Python, build tools also need to account for:

The ActiveState Platform provides a cloud-based Python build tool that requires no Python or operating system expertise. It automates the building of Python packages (including linked C libraries) from source code, resolving dependencies, and packaging your environment for deployment on Windows, Linux and Mac. Create a free account to try it out.

Does Python need to be built before running?

Python is an interpreted language, so there’s no need to compile your Python code before you run it using the Python interpreter.

However, there are some cases where you may want to compile your Python code:

For more information on how to compile your Python code into a Windows executable, refer to our blog post How to Convert .py to .exe

How do I build a Python project for deployment?

In order to run successfully on a target operating system every Python project requires:

You’ll need to build all of the ingredients listed above into a distributable file (such as a requirements.txt), an archive (such as zip or tar file) or an installer (such as an MSI for Windows or a PKG for Mac).

While there are a number of utilities you can use to help you package all the components of your Python project for each target operating system, you can use the ActiveState Platform to automatically package it for Windows, Linux and Mac. Create a free account to try it out.