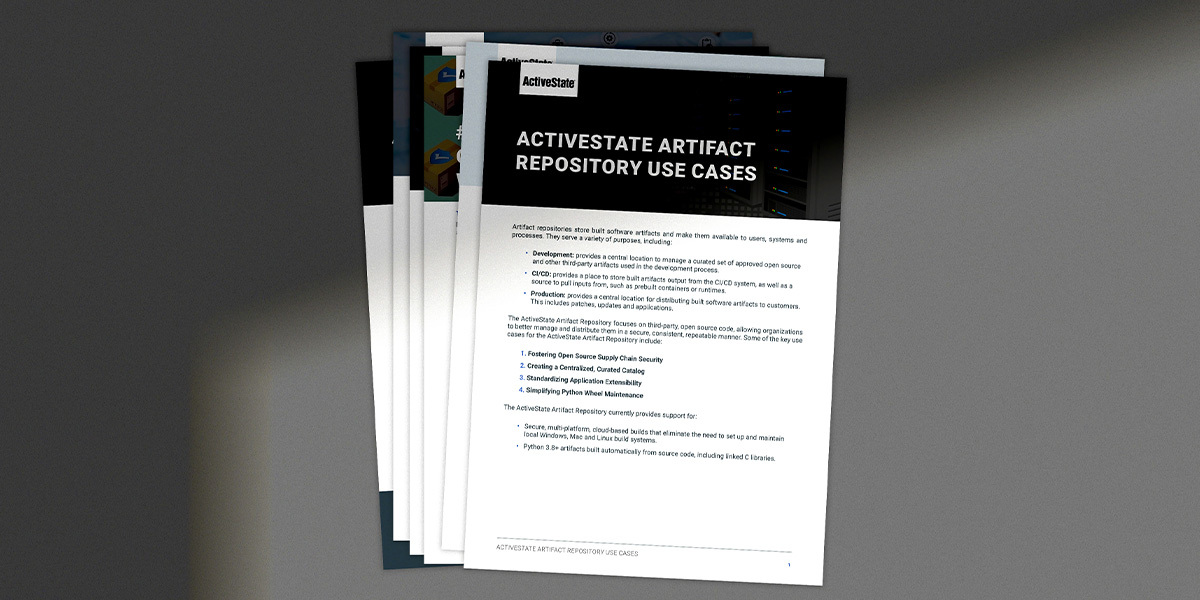 Learn key use cases for the ActiveState Artifact Repository such as fostering open source supply chain security, and having a centralized, curated catalog of Python wheels.

Artifact repositories store built software artifacts and make them available to users, systems and processes. They serve a variety of purposes, including:

Open source public repositories like the Python Package Index (PyPI) are popular because their “openness” allows anyone to publish any code they want, which software vendors can then reuse with trivial effort thanks to the ecosystem’s package manager. But this very openness is what makes the open source ecosystem so vulnerable to supply chain exploits, because open source repositories do not have:

The ActiveState Artifact Repository is the industry’s only artifact repository that includes a secure build service, which automatically builds Python wheels with all the security and integrity controls defined in the Supply chain Levels for Secure Artifacts (SLSA) specification, including:

Most enterprises require that a lengthy process be navigated before a new dependency can be approved for use by developers. For example, each new dependency will need to be assessed by security personnel for vulnerabilities, development managers for maintainability, and compliance personnel for proper licensing. Only once it has passed all of these rigorous, time-consuming reviews can the dependency be securely built and finally made available.

However, developers are creative problem solvers. If they require a third-party library to ensure their deliverables are completed on time, they will find a way to route around the approval process and download the dependency directly, potentially introducing licensing, security and compliance issues.

The Solution: Walled Garden of Dependencies

Populating the ActiveState Artifact Repository starts with source code imported from the Python Package Index (PyPI), GitHub, and other locations. It is then vetted for:

The ActiveState Artifact Repository acts as a single, central location for all stakeholders to evaluate new dependencies quickly, and then automatically build and make them available for use, dramatically shortening the approval and availability processes.

The Benefits: Ensure the use of Approved Dependencies

Software vendors that ship software to customers often provide the capability to extend their application using custom code. This enables customers to better integrate it with existing systems, or customize the solution for a specific use case.

But this also means the software vendor will be the first line of support for customers when their custom code fails. Because “custom code” can literally be anything, determining the point of failure is a non-trivial exercise that can dramatically inflate support costs.

The ActiveState Artifact Repository can be made publicly available to all customers, acting as a cloud based distribution platform for all Python dependencies approved for use. Rather than installing any package from PyPI, customers can be assured of technical support by working only with the set of approved third-party libraries sourced from the ActiveState Artifact Repository.

Software vendors that ship ActiveState’s Python within their application installer can be assured that:

Numerous reports and surveys repeatedly confirm the fact that once a codebase has been created, it’s almost never updated. This shouldn’t be a surprise since upgrades all too often result in breaking the build, typically due to the fact that upgrading one dependency triggers updates to other dependencies and/or transitive dependencies. Common build failures include:

As a result, developers waste time and effort just to get back to the status quo, rather than focusing on their deliverables. On the other hand, unupdated codebases increase security and performance/stability risks as unresolved vulnerabilities and bugs accumulate.

ActiveState can maintain your Python wheels on your behalf. Once you’ve established a set of dependencies in the ActiveState Artifact Repository, ActiveState will:

ActiveState is the de-facto standard for millions of developers around the world who have been using our commercially backed, secure open source language distributions for over 20 years. With the ActiveState Platform, developers can now automatically build their own open source artifacts and environments—all without requiring language or operating system expertise.

Learn more about how the ActiveState Artifact Repository can help ensure your developers always work with secure Python dependencies.

Book a demo and let us show you how the ActiveState Artifact Repository is the missing link in your Python Supply Chain: 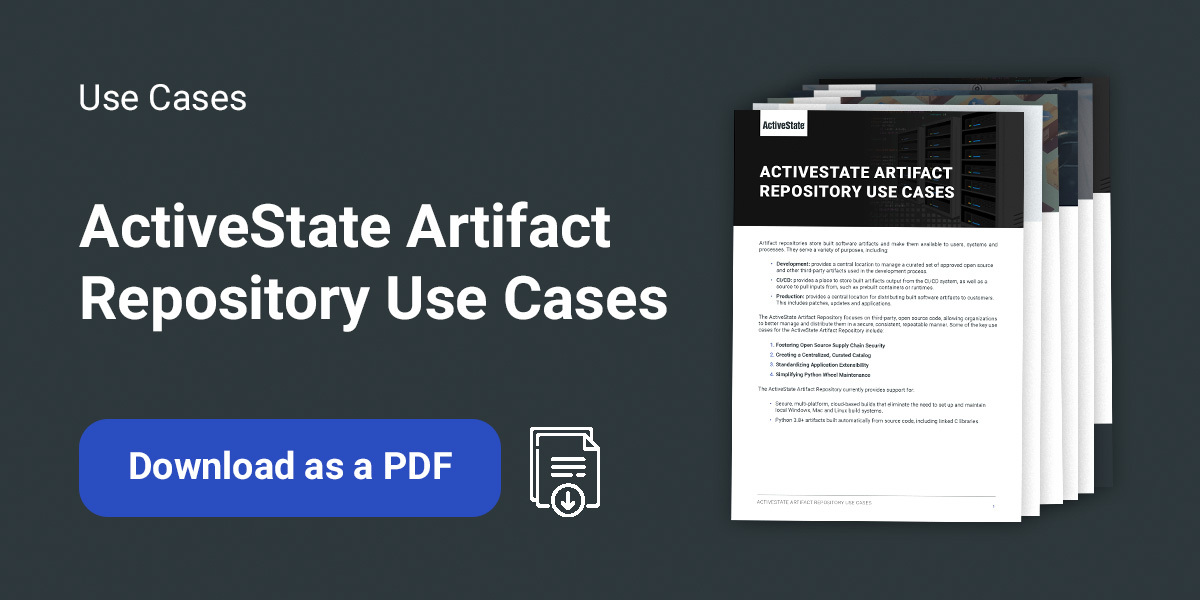