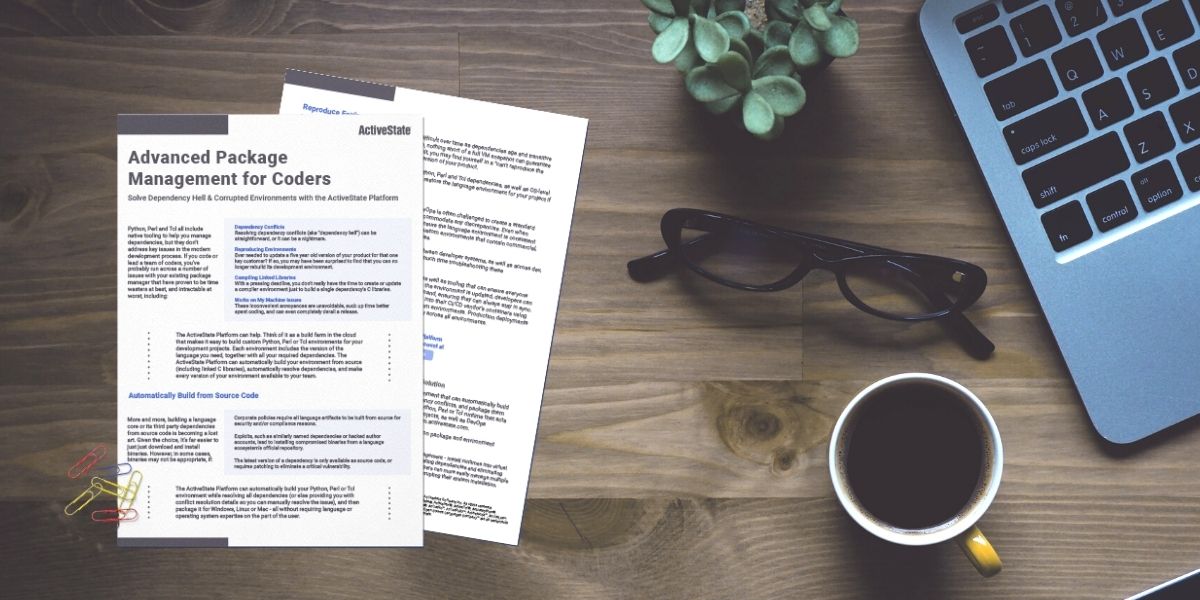 Understand how you can automatically build your Python, Perl or Tcl environment, and then package it for Windows, Linux or Mac – all without requiring language or operating system expertise.

Python, Perl and Tcl all include native tooling to help you manage dependencies, but they don’t address key issues in the modern development process. If you code or lead a team of coders, you’ve probably run across a number of issues with your existing package manager that have proven to be time wasters at best, and intractable at worst, including:

The ActiveState Platform can help. Think of it as a build farm in the cloud that makes it easy to build custom Python, Perl or Tcl environments for your development projects. Each environment includes the version of the language you need, together with all your required dependencies. The ActiveState Platform can automatically build your environment from source (including linked C libraries), automatically resolve dependencies, and make every version of your environment available to your team.

More and more, building a language core or its third party dependencies from source code is becoming a lost art. Given the choice, It’s far easier to just just download and install binaries. However, in some cases, binaries may not be appropriate, if:

The ActiveState Platform can automatically build your Python, Perl or Tcl environment while resolving all dependencies (or else providing you with conflict resolution details so you can manually resolve the issue), and then package it for Windows, Linux or Mac – all without requiring language or operating system expertise on the part of the user.

Reproducing a language environment gets more difficult over time as dependencies age and transitive dependencies shift. While artifact repositories help, nothing short of a full VM snapshot can guarantee reproducibility for OS-level dependencies. As a result, you may find yourself in a “can’t reproduce the build” situation when you need to update an older version of your product.

The ActiveState Platform saves a copy of all your Python, Perl and Tcl dependencies, as well as OS-level and other transient dependencies so you can always restore the language environment for your project if it becomes corrupted or outdated, even years later.

Eliminate “Works On My Machine”

When developers build their own dev environments, DevOps is often challenged to create a standard language environment for their CI/CD chain that can accommodate any discrepancies. Even when containers are employed, DevOps may still struggle to ensure the language environment is consistent because most CI/CD vendors provide poor support for custom environments that contain commercial, vendored or otherwise non-publicly-available dependencies.

The result can be inconsistent language environments between developer systems, as well as across dev, test and production environments. If you’re spending too much time troubleshooting these inconsistencies, the ActiveState Platform can help.

It provides all team members with a pre-built environment, as well as tooling that can ensure everyone installs a standard, consistent language environment. When the environment is updated, developers can refresh their system with the latest version via a single command, ensuring they can always stay in sync. Additionally, DevOps can pull the same pre-built environment into their CI/CD vendor’s containers using our State Tool CLI, eliminating typical CI/CD issues with custom environments. Production deployments can be dealt with in much the same way, ensuring consistency across all environments. 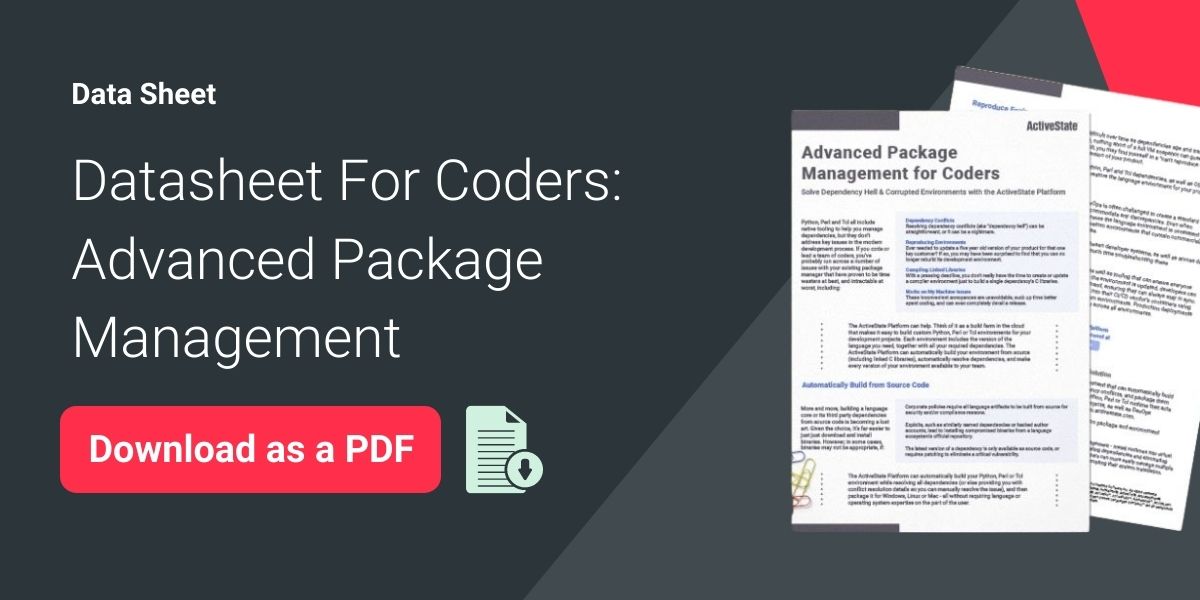 Language ecosystems, operating systems, build tooling, and dependencies continually change. Trying to line up all these factors in order to automatically build any arbitrary runtime environment at any point in time is a combinatorially complex problem. While the ActiveState Platform envisions to automate all of this in the near future, our beta can already help you create a Python, Perl, or Tcl runtime that acts as the single source of truth for all developers working on your projects, as well as DevOps managing your CI/CD processes.

At ActiveState, we use the Platform to build not only our popular open source language distributions, but also custom runtimes for our enterprise clients (i.e. builds containing just the language and packages their project requires). As a coder, you are welcome to try the Platform for free and use it for your projects.

For more information on team tier or enterprise pricing, refer to our ActiveState Platform Pricing or else contact Sales.