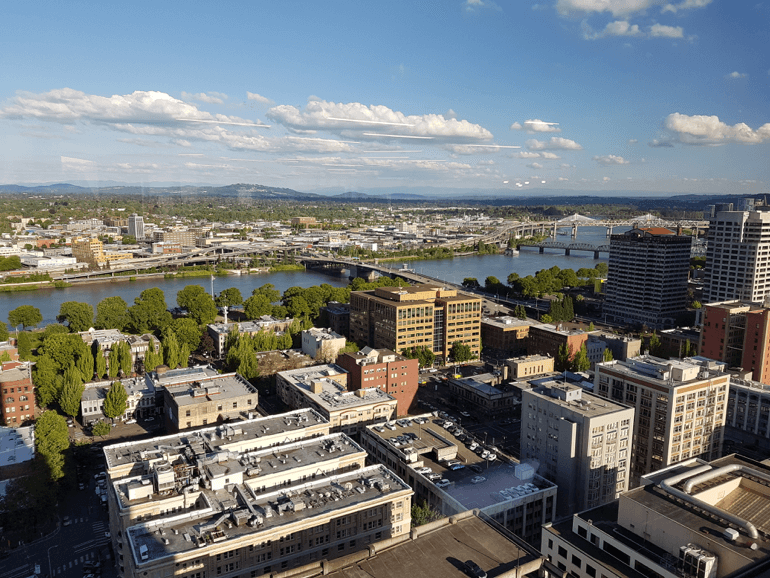 One of the best parts of PyCon 2017 was meeting with the amazing folks from the Python community. We had a great three days at the conference and the ActiveState booth was busy from start to finish (with some exciting competition in our game on the last day–see below). We’d like to thank the organizers for putting on such a great event, the fine city of Portland for their hospitality and the Python community who make it the vibrant and growing language it is today.

Of course, it wouldn’t be life without a few hiccups along the way. We had a little bit of excitement to kick off the conference, with the first day preparing our “express booth”. Our regular booth was waylaid in shipping (someone else’s furniture showed up in its place), so we improvised for the opening reception by running all over town and calling in favors. Thankfully, our full booth did arrive that evening, and we worked into the night setting it up. Hardest working sponsors at PyCon.

Some of you may have recognized the ActiveState crew from our Tabs and Spaces t-shirts. As part of the give-away at the show, we gave people an option to wear the white-space philosophy they supported: Tabs or Spaces? I don’t necessarily want to call it, but if there was any consensus in a community, Python might be leaning towards Spaces.

As part of the May ActivePython release, we added a number of essential machine learning and data science packages to our distribution. To showcase these new tools, our own Pete Garcin built a cool new video game called NeuroBlast. Pete had as much fun building it as people had playing it, and he learned a ton about machine learning in the process.

NeuroBlast was a great curiosity, with lots of folks stopping by to try their hand at the game, and to talk about the neural network behind it. Pete has written a follow-up blog on how he used TensorFlow, Keras and the Intel® Math Kernel Library (MKL) running on ActivePython to build the game. And yes, it’s coming soon to Github, so be on the lookout for that.

Can’t be said enough. One of the best things about offering language distributions is working with the open source community. And it was great to connect with Python developers over the course of the event.

During the show we met with a number of people deep in the machine learning space at Amazon, Google’s TensorFlow team, and various researchers who came by to have in-depth conversations about using Python for machine learning, and were impressed with our test case (NeuroBlast). We can give Pete a BIG pat on the back for that.

We also got to meet with the hosts of some of the most popular Python podcasts: Michael Kennedy of Talk Python To Me and Brian Okken of Test & Code. Shows like these are great ways to help promote the importance of the language and engage the community by discussing a variety of issues that are highly relevant to Python programmers everywhere.

It was also fantastic to meet Steve Dower of the Python Core Team. We had a great chat with him about Tcl, OpenSSL and maintaining it for Python. As a founding sponsor of the Python Software Foundation, and offering our own Python distribution for over 15 years, we value the chance to speak with the core team and get their insights. PyCon offers one of the best opportunities each year for us to get together in person.

We also took in Dr. Brett Cannon’s “What’s New in Python 3.6” which included a look at all 16 PEPs included in that update. We were fortunate enough to run into him in the elevator at one point shared a joke about “Canadians in an elevator”. It was very polite.

Intel’s MKL was all the rage at this year’s event. People are very excited about the “free” speed-ups they can potentially get out of NumPy and SciPy, with estimates ranging from 10x increases on individual workstations to many times higher as more processor cores are added. As part of the May release of ActivePython, we integrated the Intel MKL into our Python distribution. This update was well received and of great interest to attendees stopping by our booth. After all, who doesn’t like to save time, particularly statistically motivated data scientists.

ActiveState’s Director of Product Management, Jeff Rouse (aka JR), was also a guest speaker at the Intel booth, giving two talks about how we integrate the MKL optimization in ActivePython, as well as discussing the wealth of tools available, with an overview of TensorFlow.

It was great getting to know the engineers at Intel and finding out more about the huge effort they are putting into MKL. With their intimate knowledge of their processors, they had some valuable talks for anyone looking to learn more about the deep level performance improvements that Intel is providing.

We all got to attend a few talks by excellent leaders in the community–from a gentle “Intro to Tensorflow” (which excellently outlined how to construct deep learning networks) to learning about many of the great improvements in Python 3.6. Yes, we have a distro for that…you can try it out by creating a free account on the ActiveState Platform.

Thanks again for a memorable week. We look forward to seeing you all again at PyCon 2018 in Cleveland!