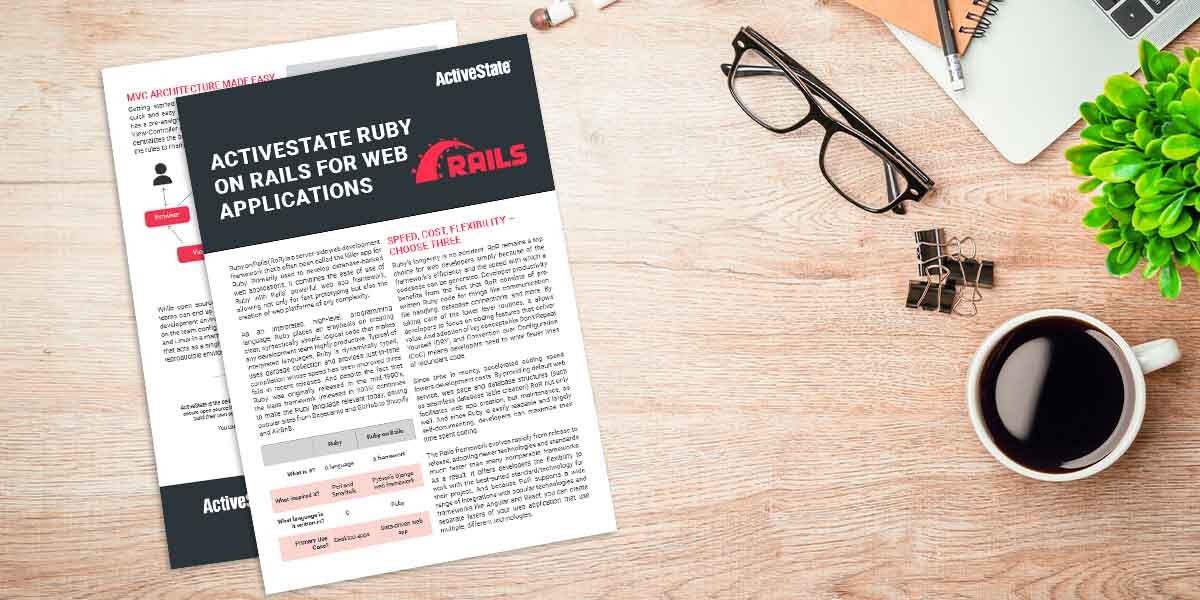 While open source Ruby provides many of the webDev tools and libraries you’ll need, development teams can end up wasting days on the low-value work of building, configuring and troubleshooting their development environment before they can even write their first line of code. Download this data sheet to learn how anyone on the team can configure and automatically build a secure Rails environment from source code for Windows and Linux in a matter of minutes.

Ruby on Rails (RoR) is a server-side web development framework that’s often been called the killer app for Ruby. Primarily used to develop database-backed web applications, it combines the ease of use of Ruby with Rails’ powerful web app framework, allowing not only for fast prototyping but also the creation of web platforms of any complexity.

As an interpreted, high-level, programming language, Ruby places an emphasis on creating clear, syntactically simple, logical code that makes any development team highly productive. Typical of interpreted languages, Ruby is dynamically typed, uses garbage collection, and provides just-in-time compilation whose speed has been improved threefold in recent releases. And despite the fact that Ruby was originally released in the mid-1990’s, the Rails framework (released in 2005) continues to make the Ruby language relevant today, driving popular sites from Basecamp and GitHub to Shopify and Airbnb.

Ruby’s longevity is no accident. RoR remains a top choice for web developers simply because of the framework’s efficiency and the speed with which a codebase can be generated. Developer productivity benefits from the fact that RoR consists of pre-written Ruby code for things like communication, file handling, database connections, and more. By taking care of the lower level routines, it allows developers to focus on coding features that deliver value. And adoption of key concepts like Don’t Repeat Yourself (DRY) and Convention over Configuration (CoC) means developers need to write fewer lines of redundant code.

Since time is money, accelerated coding speed lowers development costs. By providing default web service, web page and database structures (such as seamless database table creation) RoR not only facilitates web app creation, but maintenance, as well. And since Ruby is easily readable and largely self-documenting, developers can maximize their time spent coding.

The Rails framework evolves rapidly from release to release, adopting newer technologies and standards much faster than many comparable frameworks. As a result, it offers developers the flexibility to work with the best-suited standard/technology for their project. And because RoR supports a wide range of integrations with popular technologies and frameworks like Angular and React, you can create separate layers of your web application that use multiple, different technologies.

Getting started writing a RoR web application is quick and easy thanks to the fact that  everything has a pre-assigned home. RoR enforces the Model-View-Controller (MVC) web app architecture, which centralizes the business logic of the application and the rules to manipulate the data:

Using this kind of MVC architectural pattern not only improves RoR web app maintainability, but also facilitates decoupling and testing.

While open source Ruby provides many of the webDev tools and libraries you’ll need, development teams can end up wasting days on the low-value work of building, configuring and troubleshooting their development environment before they can even write their first line of code. ActiveState Ruby lets anyone on the team configure and automatically build a secure Rails environment from source code for Windows and Linux in a matter of minutes. No language or OS expertise is required to create a runtime environment that acts as a single source of truth for all your team members, ensuring they can work with a consistent, reproducible environment that eliminates “works on my machine” issues. 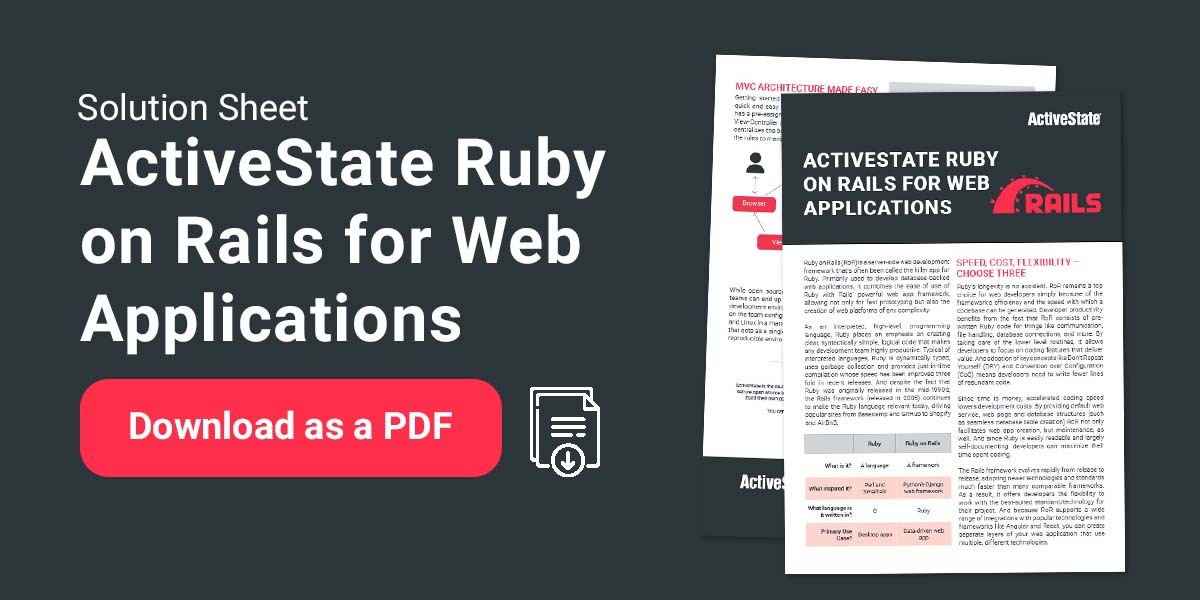