ActiveState Ruby: The Trusted Language for Web Development From The Industry’s Most Trusted Vendor 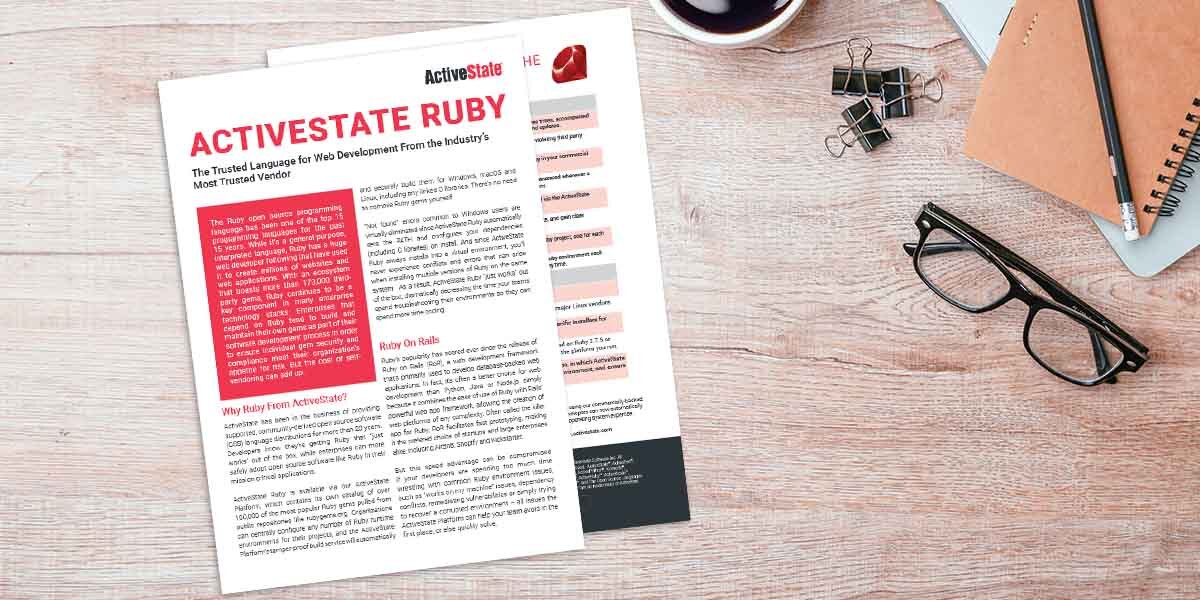 ActiveState Ruby is available via our ActiveState Platform, which contains its own catalog of over 100,000 of the most popular RubyGems pulled from public repositories like rubygems.org. ActiveState Ruby “just works” out of the box, dramatically decreasing the time your teams spend troubleshooting their environments so they can spend more time coding. Download this datasheet to learn about it.

The Ruby open source programming language has been one of the top 15 programming languages for the past 15 years. While it’s a general-purpose, interpreted language, Ruby has a huge web developer following that has used it to create millions of websites and web applications. With an ecosystem that boasts more than 170,000 third-party gems, Ruby continues to be a key component in many enterprise technology stacks. Enterprises that depend on Ruby tend to build and maintain their own gems as part of their software development process in order to ensure individual gem security and compliance meet their organization’s appetite for risk. But the cost of self-vendoring can add up.

Why Ruby From ActiveState?

ActiveState has been in the business of providing supported, community-derived open source software (OSS) language distributions for more than 20 years. Developers know they’re getting Ruby that “just works” out of the box, while enterprises can more safely adopt open source software like Ruby in their mission-critical applications.

ActiveState Ruby is available via our ActiveState Platform, which contains its own catalog of over 100,000 of the most popular RubyGems pulled from public repositories like rubygems.org. Organizations can centrally configure any number of Ruby runtime environments for their projects, and the ActiveState Platform’s tamper-proof build service will automatically and securely build them for Windows and Linux, including any linked C libraries. There’s no need to compile RubyGems yourself.

“Not found” errors common to Windows users are virtually eliminated since ActiveState Ruby automatically sets the PATH and configures your dependencies (including C libraries) on install. And since ActiveState Ruby always installs into a virtual environment, you’ll never experience conflicts and errors that can arise when installing multiple versions of Ruby on the same system.  As a result, ActiveState Ruby “just works” out of the box, dramatically decreasing the time your teams spend troubleshooting their environments so they can spend more time coding.

Ruby’s popularity has soared ever since the release of Ruby on Rails (RoR), a web development framework that’s primarily used to develop database-backed web applications. In fact, it’s often a better choice for web development than Python, Java, or Node.js simply because it combines the ease of use of Ruby with Rails’ powerful web app framework, allowing the creation of web platforms of any complexity. Often called the killer app for Ruby, RoR facilitates fast prototyping, making it the preferred choice of startups and large enterprises alike, including AirBnB, Shopify, and Kickstarter.

But this speed advantage can be compromised if your developers are spending too much time wrestling with common Ruby environment issues, such as “works on my machine” issues, dependency conflicts, remediating vulnerabilities or simply trying to recover a corrupted environment – all issues the ActiveState Platform can help your team avoid in the first place, or else quickly solve. 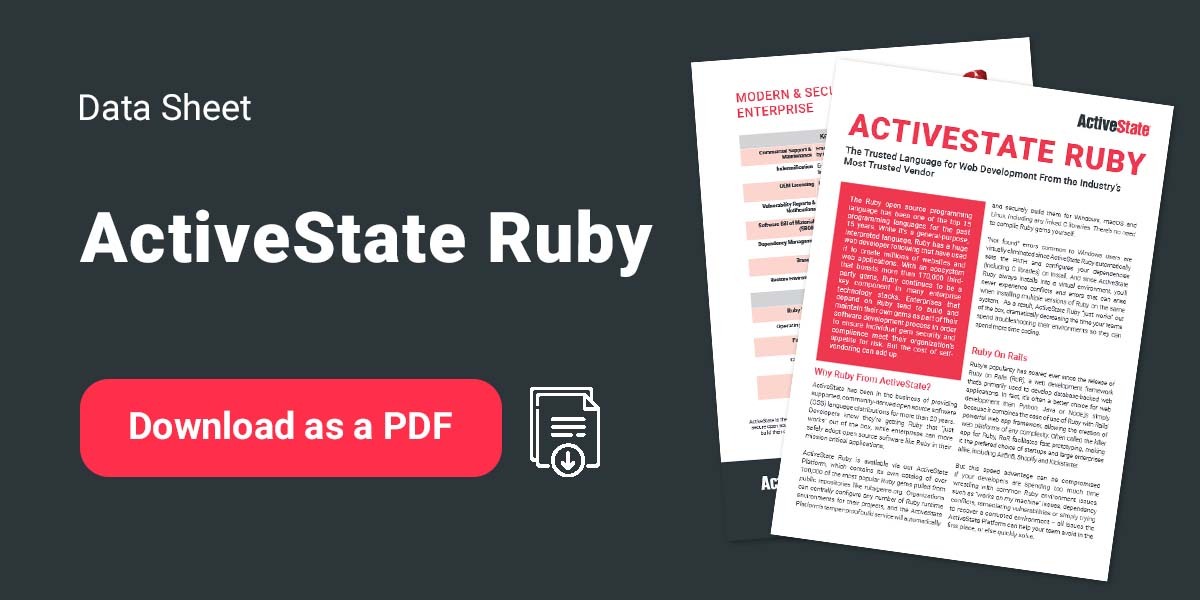