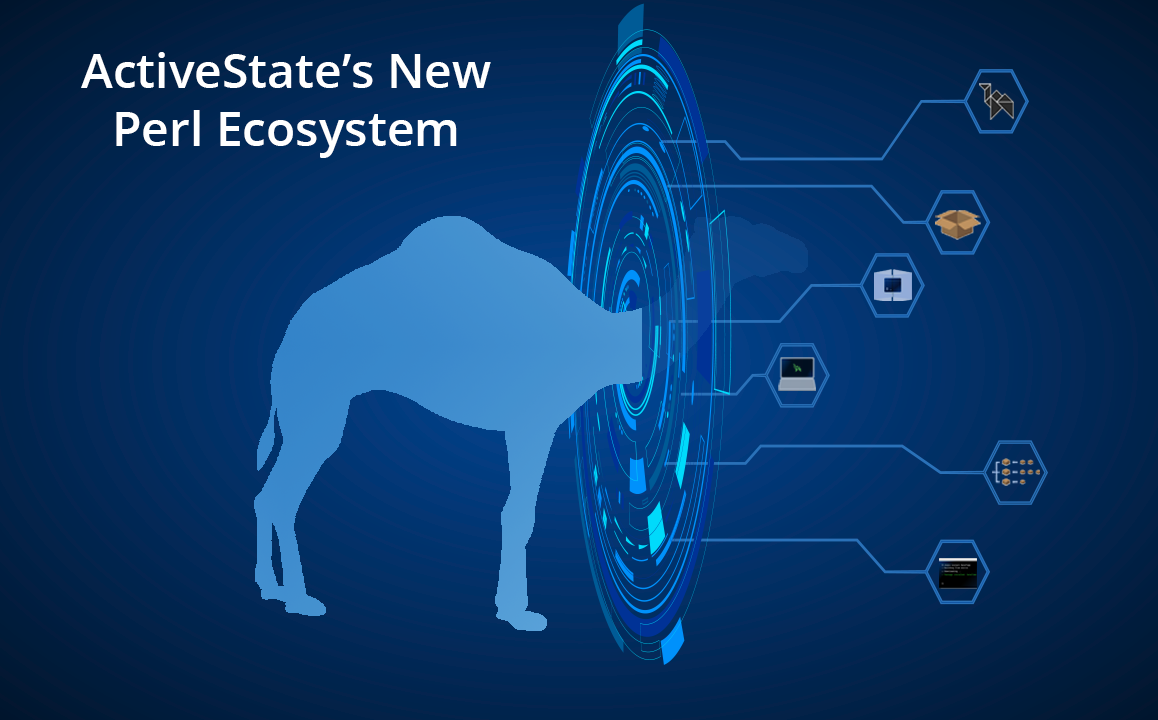 Fifteen years ago, ActiveState introduced our first Perl ecosystem consisting of ActivePerl 5.8 and its package management solution, Perl Package Manager (PPM). Together, they allowed a generation of Perl developers to more easily deploy and manage their installations by allowing them to add dependencies with linked C libraries without requiring a local build environment.

But advances in computing over the past 15 years have meant that our original Perl ecosystem has not aged well. PPM in particular has failed to build more and more dependencies over time until it was finally excluded from our ActivePerl 5.28 release.

So I’m pleased to announce that earlier this month, ActiveState introduced a new version of our Perl ecosystem with the release of Perl 5.32, which provides a new way to install, work with and even consume Perl from ActiveState.

You can learn more and download your own version of ActiveState’s new Perl ecosystem for free from our Perl 5.32 page.

Traditionally, Perl 5.32 would have been just another ActivePerl release featuring hundreds of Perl modules that have been packaged in an installer for Windows, Mac or Linux. But that would also mean one of the key reasons developers use ActivePerl would once again be missing: PPM. Instead, ActiveState’s Perl 5.32 is built around our new package manager, the State Tool.

But if you’re no longer getting ActivePerl+PPM what are you getting? ActiveState’s Perl 5.32 is simply the Perl 5.32 core delivered along with the State Tool. The proprietary patches we used to apply to ActivePerl to make it (arguably) easier to use? Gone. The ActiveState EULA that imposed restrictions on how you could deploy Perl? Also gone. Instead, you have a single command that will download and get you started with Perl 5.32 – licensed under its standard open source licensing terms – in just a few seconds.

While PPM is gone, the need to install dependencies without requiring a local build environment remains. Similarly, ActivePerl allowed developers to get up and running quickly by delivering hundreds of the most popular modules with a single installation. Both of these use cases continue to remain valid, and are both addressed in ActiveState’s new ecosystem.

State Tool vs PPM. As we did previously with PPM, we’ve open sourced the State Tool so you can see exactly what you’re getting. The State Tool GitHub repository is available for you to clone, contribute, report issues, or just submit a new idea/suggestion.

And like PPM, the State Tool allows you to simply run a command like state install <package-name> to add a dependency to your environment. The dependency (and its sub-dependencies, as well as any linked C libraries) will automatically be built in parallel by the ActiveState Platform, and then installed locally in your environment.

Perl vs ActivePerl. By default, ActiveState’s Perl 5.32 installs only the core Perl libraries and the State Tool. Any other module/dependency will need to be added separately. The State Tool supports importing both CPANfile and META.json files, and the ActiveState Platform will build all dependencies in parallel (or pull them cache, as appropriate), simplifying and speeding setup. But what if you don’t have a starting point for your project?

ActiveState’s Perl 5.32 supports a new concept: bundles, which are simply functional groups of Perl dependencies. For example, if you work with Catalyst or Mojolicious, you’ll want to import the Catalyst or Mojolicious bundle, which includes more than 50 of the most popular plugins for each framework. Similarly if you’re working with Windows, you can import the Win32 bundle. Or simply select all bundles to import hundreds of dependencies at once and create an installation similar to ActivePerl.

But our new ecosystem also offers some significant advantages over our old approach, including:

A Unified Toolchain. If your teams develop and deploy on multiple operating systems, your organization has to manage multiple toolchains in order to build, update and manage your Perl environments. In contrast, the State Tool delivers a consistent package management experience across Windows and Linux (Mac coming soon) so you only need one toolchain to support all your teams.

Virtual Environment Support. ActivePerl’s global, system-wide installation is not suitable for managing multiple Perl projects, which is today’s norm for many developers. To address this use case, the State Tool will automatically create a virtual environment for each of your projects, isolating dependencies and ensuring against conflicts.

Open Source Licensing. Perl 5.32 and all the dependencies you install with the State Tool are licensed under their original licenses. The ActivePerl proprietary license is no longer included.

At a Linux command prompt:

But if you do sign up for an ActiveState Platform account, you can unlock a wealth of productivity features that can significantly enhance your Perl experience, including:

Ready to get started? You can download your own version of ActiveState’s new Perl ecosystem for free from our Perl 5.32 page.