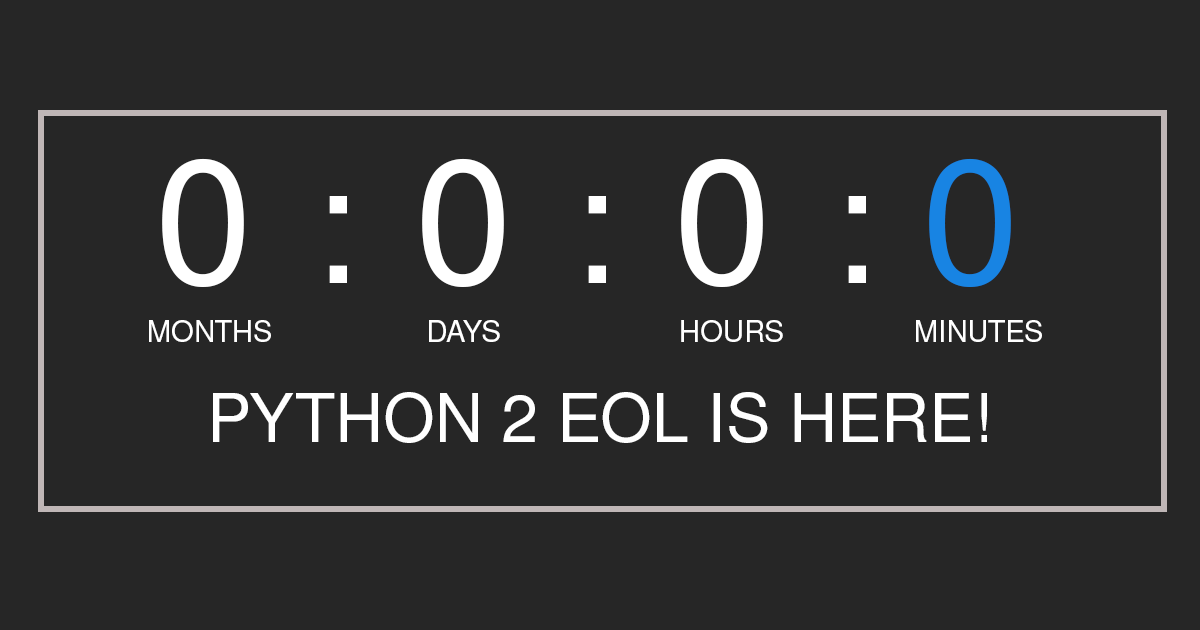 Python 2 Support Update 2022: Even if you’re only running Python 2 in non-production environments, it is still vulnerable. The increasing threat of supply chain attacks makes it more important than ever to secure your Python 2 code.

ActiveState continues to provide Python 2 support to help organizations safely run their Python 2 applications, services, and systems, at a fraction of the cost they spend in developer hours maintaining them.

If you’re like most Python developers, you’ve been working with Python 2 for years. Now, with the Python Software Foundation announcing the End of Life (EOL) for Python 2, the core development team will no longer support, update or provide new versions of Python 2 as of January 1, 2020.

As a developer, you’d probably prefer to adopt Python 3, but for various reasons (corporate policy, lack of resources, legal restrictions, contractual obligations, etc.), your organization may be stuck maintaining existing applications on Python 2 (or even continuing to develop with Python 2) for the foreseeable future. So what can you do?

Your Python 2 applications will keep running past Jan 1, 2020 – they won’t self destruct – but they will become less reliable and more vulnerable over time as bugs, security issues and CVEs crop up. Some things to think about:

For example, AWS’s Lambda support page states that deprecated runtimes can’t be used to create new functions, but can still be used to process invocation events.

If you’re unwilling or unable to migrate your Python 2 applications to Python 3, the future is not as precarious as you might think. The IT landscape is littered with deployments of operating systems (Windows XP anyone?), applications (such as Internet Explorer 6, which stubbornly refused to die) and older versions of various tech stacks (COBOL, Java, etc) that are officially sunset, but continue to be in use.

In each of these cases, organizations typically adopt one of two commonly used tactics:

Self-Support vs. Commercial Support for Python 2

If you make the decision to support Python 2 yourself, there are a number of options you should consider, including:

With more than 20 years of experience supporting Python for enterprises, ActiveState can help you maintain your Python 2 code going forward in much the same way you maintain it today.

Commercial Python support is available today for both Python 2 and Python 3. Extended support for Python 2 begins on Jan. 1, 2020. To learn more, you can: