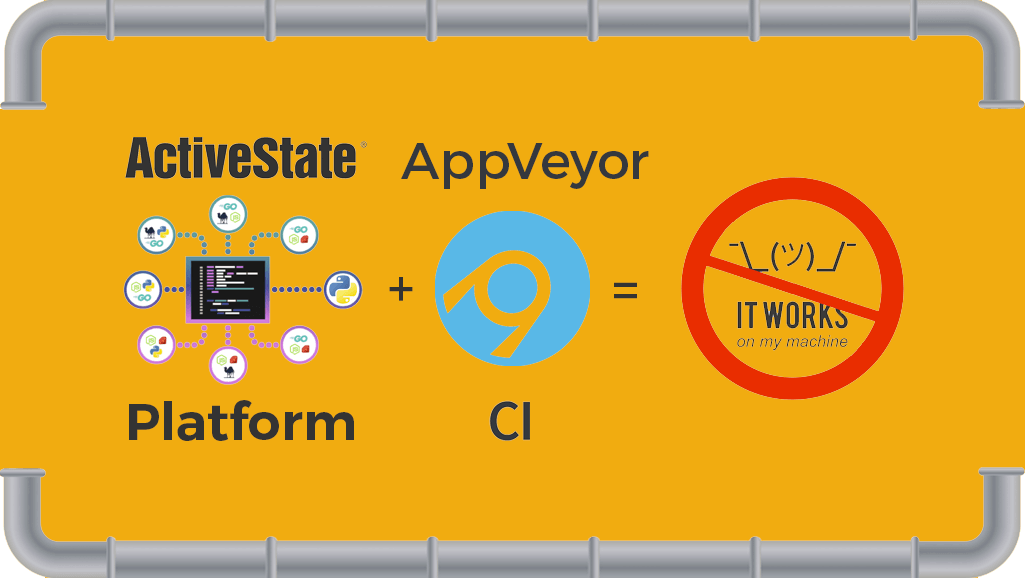 In my last CI/CD blog (How to Build a CI/CD Pipeline for Python), I explained how standardized tooling from ActiveState can simplify the setup of build environments by making the runtime environment perfectly reproducible not only on individual developer machines, but on CI/CD and production machines as well, with a single automatable command.

This time around, I’ll discuss how the ActiveState solution can be applied to simplifying the setup of a CI/CD system for Windows builds using another popular CI/CD tool, AppVeyor as an example. Once again, I’ll be using a sample application written in Python and hosted on GitHub. AppVeyor will grab the source code from GitHub and the language runtime environment from the ActiveState Platform, and then build and run its tests for a successful round of development iteration. Not that while I’m using a Python project for this example, the methodology works just as well for Perl projects.

We’ll use the standard git client to sync the code from GitHub, and the State Tool to sync the Python runtime environment from the ActiveState Platform. So before we can get started, you’ll need to:

AppVeyor is a leading CI/CD service for Windows, which also supports Linux and macOS. In this case, I’ll be using it as a build example for Windows environments. The setup is not much different than the steps I went through when setting up Travis CI for Linux builds, namely:

3. Link your GitHub account to bring in your forked project:

Bringing in your own projects via other supported source control systems is not difficult, and as long as you have the right .yml files with correct settings in your project, AppVeyor should be able to pick them up.

Once you’ve imported your project, there are a number of setup steps you’ll need to take:

2. Create an environment variable, and enter your ActiveState API key under the Environment tab:

To get the API Key, first use the State Tool in powershell to authenticate:

And then run the following command:

The JSON response contains your API key in the “token” field (not “tokenID”). Copy this value (don’t forget to exclude the quotation marks around the text) into the ActiveState API Key Environment Variable you created in AppVeyor and you’re good to go.

1. Click the “Save” button at the bottom of the settings pages

3. Click the New Build button to start your build on AppVeyor.

The CI will pull it’s setting from appveyor.yml:

The YAML file is pretty barebones:

Note that the linting and testing scripts are the same as those used for the Linux build on Travis CI, since the State Tool’s scripting capabilities are cross-platform. In fact, the only difference between an AppVeyor configuration for Windows and a Travis configuration for Linux is that the State Tool installation script is now executed by powershell in Windows.

If everything went well, you should see a successful build from AppVeyor at this point:

The ActiveState Platform, in conjunction with the State Tool, simplifies CI/CD setup by providing a consistent, reproducible environment deployable with a single command to developer desktops, test instances and production systems. Additionally, since the ActiveState Platform builds all runtime packages and dependencies from vetted source code, binary artifacts can be traced back to their original source, helping to resolve the build provenance issue.