How to Optimize Perl CI/CD Pipelines for Github Actions 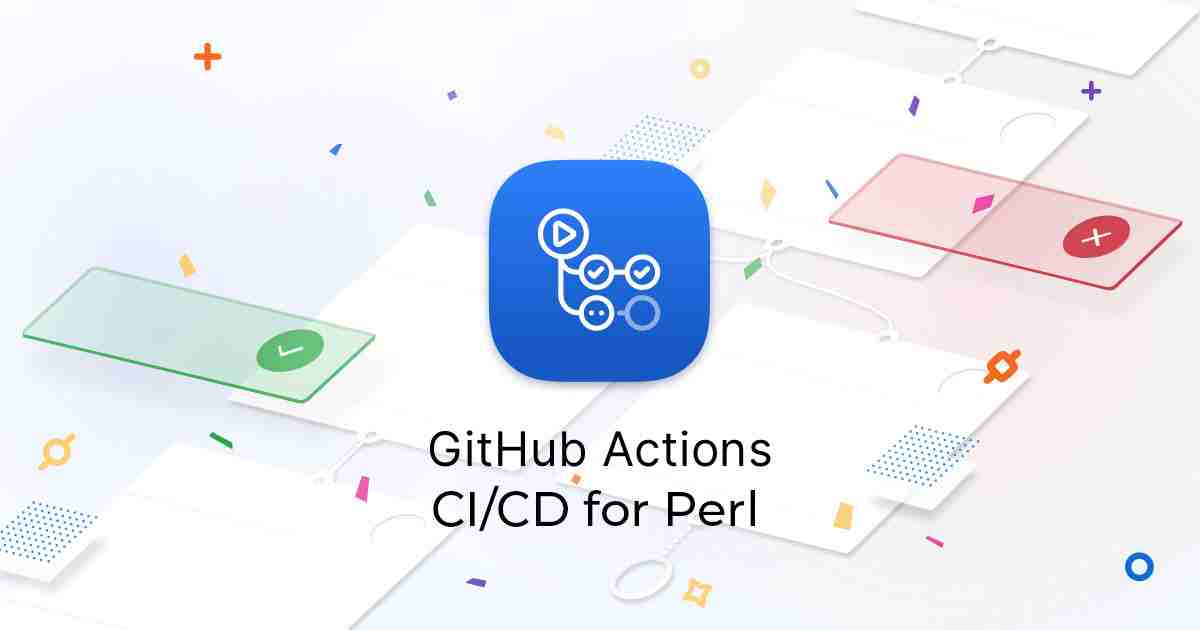 Github Actions provides a good way for GitHub users to implement Continuous Integration/Continuous Delivery (CI/CD) for their GitHub repositories. Unfortunately, when it comes to CI/CD, Perl is rarely treated as a first class citizen. The fact is that most large Perl applications were written long before CI/CD became a best practice, but it’s just as important for speeding up code delivery in Perl applications today. As a result, most popular CI/CD products have features that support setting up environments to execute Perl code, but usually it’s not as “out of the box” as other more popular languages like Python (ie., you might not find Perl examples in tutorials or help documentation).

GitHub Actions is no exception. However, Github Actions is one of the more fully-featured CI/CD products on the market, and has an attractive policy (free for public projects) for open source developers in particular.

If you’re planning on using GitHub Actions for your Perl CI/CD solution, or are interested in what it has to offer, this blog post can help you overcome the idiosyncrasies that may be acting as a barrier to adoption. In addition, it provides instructions on how to use GitHub Actions in conjunction with the ActiveState Platform to take care of the dependency management and runtime environment issues that usually makes dealing with CI more difficult.

For a more vanilla use case of setting up GitHub Actions for Perl projects, you can check out Olaf Alders’ presentation at The Perl Conference 2020, Getting Started with GitHub Actions.

Getting Started with CI/CD and ActiveState Platform

The last remaining step will be to build and run the sample project’s tests for a successful round of development iteration.

For this example, I’ll use a matrix build (Windows and Linux) on a cloud-hosted VM. Note that this is basically the exact same configuration I used for running Python CI/CD pipelines with GitHub Actions, just with some very minor changes involving ExifTool code-specific issues. The fact that you can use the same configuration no matter the language is an artifact of how the ActiveState Platform is designed.

This will create a new default .yaml file under your project’s /.github/workflows/ folder.

If you’re on a paid plan, you may see a warning  because of potential cost consequences. Just click the “I understand…” button to continue.

Note that you won’t see a workflow created immediately because the original perlapp.yml file you forked still exists in the /.github/workflows/ folder, and is configured to trigger on push. Let’s take a look at it:.

This YAML file might look a bit complicated, but that’s because:

In summary, the example perlapp.yml file above basically:

The Perl environment will be downloaded from the ActiveState platform automatically by the test script when changes are detected in the project (which will update activestate.yaml). GitHub CI will also update the cache when changes are detected in activestate.yaml, so until the next time your Perl environment changes, everything will be reused from cache.

This setup should work for most Perl projects with slight modifications. The YAML elements that could be tweaked include:

Let’s have a quick look at activestate.yaml, which is also located in the root folder of your exiftool_cicd repo:

For more information on creating scripts with the State Tool, please refer to the documentation.

If you build for multiple OS’s, one of the key advantages of the ActiveState approach is it ensures the same Perl environment is used for each test irrespective of the OS. By default, GitHub Actions uses  different versions of Perl on different OS platforms, which is something you would have to account for and correct.

Once you’re done editing the Github Actions YAML file, you can now start a run.

Github Actions is a suitable CI/CD solution for Perl applications, but it’s just one of many on the market. Ultimately, it’s your application’s needs that will determine which CI/CD solution is best for your Perl projects.

One of the key advantages of using ActiveState Platform to manage your Perl environment is portability. Once the ActiveState tooling is set up, you don’t need to worry about the issues/differences between how the platforms work, or how they set up Perl environments (which always differs from how you would do it on your desktop). And no matter which CI/CD solution you use, the ActiveState Platform can help guarantee that the Perl environments for your projects are consistent for every run, no matter when it’s run (ie., dependencies will not break) or for which operating systems. Taking one more variable out of the CI/CD equation will simplify your life and give you back time to do what you enjoy (hint: it’s not fighting with CI).

In summary, the ActiveState Platform, in conjunction with the State Tool, simplifies development workflow and CI/CD setup by providing a consistent, reproducible Perl environment deployable with a single command. Having a simpler CI/CD setup helps reduce training and maintenance time for engineers responsible for setting up the CI/CD environments. Additionally, since the ActiveState Platform builds all modules and dependencies from vetted source code, binary artifacts can be traced back to their original source, helping to resolve the build provenance issue.

UPDATE: Our release of Perl 5.32 is now available! This release offers a better way to manage your Perl deployments by offering automated dependency management, virtual environments, revision control, team collaboration tools, parallel builds, and much, much more. Try it for free here.