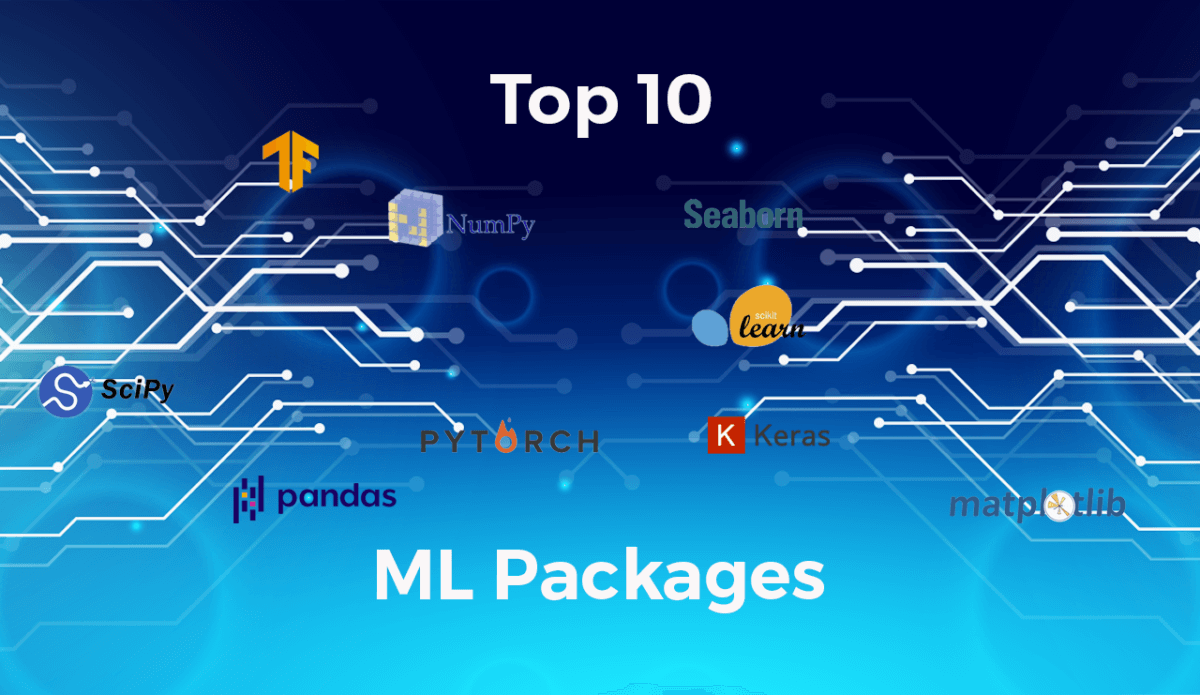 Understand the top 10 Python packages for machine learning in detail and download ‘Top 10 ML Packages runtime environment’, pre-built and ready to use – For Windows or Linux.

The field of data science relies heavily on the predictive capability of Machine Learning (ML) algorithms. Python offers an opportune playground for experimenting with these algorithms due to the readability and syntactical efficiency of the language. The vast availability of ML libraries accessible to Python users makes it an even more attractive solution to interpret the immense amount of data available today.

This article explores the top 10 ML packages that you need to know, as well as the advantages and disadvantages of each.

A Python framework is an interface or tool that allows developers to build ML models easily, without getting into the depth of the underlying algorithms.

Python libraries are specific files containing pre-written code that can be imported into your code base by using Python’s import feature. This increases your code reusability.

A Python framework can be a collection of libraries intended to build a model (e.g., machine learning) easily, without having to know the details of the underlying algorithms. An ML developer, however, must at least know how the algorithms work in order to know what results to expect, as well as how to validate them.

Now that we know the difference between a Python framework and a library, let’s get right to the countdown of the top 10 Python packages for machine learning.

Matplotlib is an interactive, cross-platform library for two-dimensional plotting. It can produce high-quality graphs, charts and plots in several hardcopy formats.

NLTK is a framework and suite of libraries for developing both symbolic and statistical Natural Language Processing (NLP) in Python. It is the standard tool for NLP in Python.

Pandas is a Python library for providing high-performance, easy-to-use data structures and data analysis tools for the Python programming language.

The Python library, Scikit-Learn, is built on top of the matplotlib, NumPy, and SciPy libraries. This Python ML library has several tools for data analysis and data mining tasks.

Seaborn is a library for making statistical graphs in Python. It is built on top of matplotlib and also integrated with pandas data structures.

NumPy adds multi-dimensional array and matrix processing to Python, as well as a large collection of high-level mathematical functions. It is commonly used for scientific computing and hence, one of the most used Python Packages for machine learning.

Keras is a very popular ML for Python, providing a high-level neural network API capable of running on top of TensorFlow, CNTK, or Theano.

PyTorch is a popular ML library for Python based on Torch, which is an ML library implemented in C and wrapped in Lua. It was originally developed by Facebook, but is now used by Twitter, Salesforce, and many other major organizations and businesses.

Under the hood, it’s actually a framework for creating and running computations involving tensors. The principal application for TensorFlow is in neural networks, and especially deep learning where it is widely used. That makes it one of the most important Python packages for machine learning

Now that you understand:

You should be prepared to dive in, explore, and experiment with one of the most interesting drivers of the future of programming: machine learning. To get started, you can:

What are the top Python machine learning packages?

The top Python machine learning packages you need to know include:

Get the Top 10 ML Packages runtime for Windows or Linux, which includes the top machine learning packages pre-built and ready to use.

What is the best Python version for machine learning?

Machine learning is a fast evolving field in Python. If you want to keep up with the latest developments, you should use a recent version of the latest major release of Python.

Download ActiveState’s latest Python releases, which include many of the top machine learning packages.

What is machine learning in Python used for?

Check out the Python Tips & Tricks for Machine Learning cheat sheet to help you save time on your machine learning projects.

Which Python machine learning package is better: PyTorch or TensorFlow?