How to Check for Python Dependencies

Sometimes during installation of a dependency, an issue will arise. In some cases, it’s a missing requirement, while at other times you’ll be confronted by a version conflict. Luckily, there are a number of utilities available to you to help at least identify, if not resolve the issue.

Depending on which package manager you use (pip, conda, or Poetry), they all have different approaches to checking for Python dependencies and identifying issues.

Because pip doesn’t currently address dependency issues on installation, the pip check command option can be used to verify that dependencies have been installed properly in your project.

In this case, you’ll need to manually install the missing dependency.

Unlike pip, conda checks Python dependencies at installation time and tries to identify conflicts and errors before they happen. For example:

May result in the following message:

Typically, this can result in a list of dependency names and versions that are incompatible with one another that you will need to manually resolve before the package can be installed. See the section below on “Pipdeptree and Conda” for information on how to visualize the conflicts so you can solve them more easily.

Like conda, Poetry has a solver built into the install command that can help identify dependency conflicts and ensure environments contain a full set of required dependencies.

When you use the poetry install command to install dependencies, it will check for conflicts and then create a poetry.lock file that contains a list of all your project’s Python dependencies.

Similarly, when updating your project, the poetry update command resolves all project dependencies for you, and writes the exact versions into the poetry.lock file:

When conflicts do occur, it’s usually far easier to visualize dependency tree conflicts than try to muddle through them on the command line. That’s where pipdeptree comes in. It’s a useful utility for displaying installed packages and dependencies in the form of a visual tree that is easy to understand at a glance. Pipdeptree can be used to verify whether all dependencies for a project have been installed correctly.

For example, to install Pipdeptree and display a dependency tree for a setuptools project:

2. Enter the following command to display a dependency tree for a setuptools project or package:

You can optimally just compare the project dependency tree to the minimum dependency requirements stated in the install_requires section of the project setup.py file.

For more information about setup.py and install_requires, refer to: How to Package Python Dependencies for Publication

For more information about using pipdeptree in a virtual environment, refer to: Python Dependency Management Tools

To install pipdeptree and display a dependency tree for a Conda project, enter:

Enter the following command to display a dependency tree for a project or package:

The ActiveState Platform is a cloud-based build automation and dependency management tool for Python. It provides dependency resolution for: 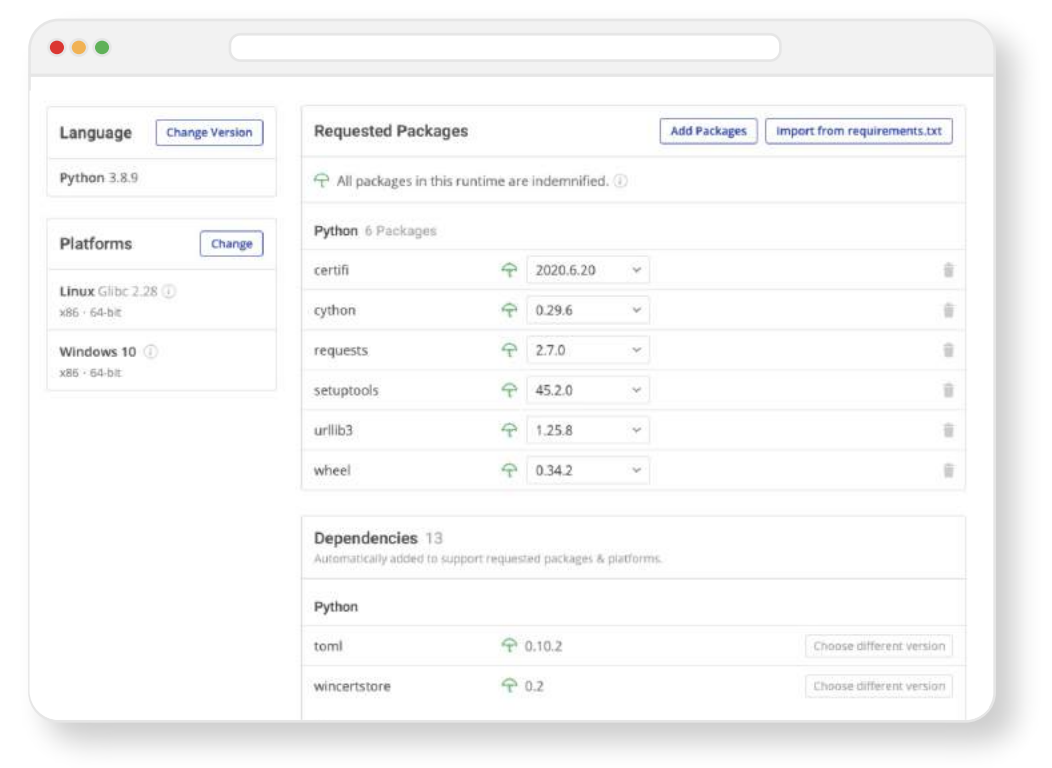 The ActiveState Platform is the only Python package management solution that not only resolves dependencies but also provides workarounds for dependency conflicts.

You can try the ActiveState Platform for free by creating an account using your email or your GitHub credentials.  Start by creating a new Python project, pick the latest version that applies to your project, your OS and start to add & install packages. Or start by simply importing your requirements.txt file and creating a Python version with all the Python libraries you need.

Ultimately, developers that are willing to adopt the ActiveState Platform for Python packaging will spend less time wrestling with tooling and more time focused on doing what they do best: coding.

Just run the following command to install Python 3.9 and our package manager, the State Tool:

How to use Python Dependency Management Tools

Python Dependencies – Everything You Need To Know