Try a faster and easier way to manage your Python dependencies. Use Python 3.9 by ActiveState and build your own runtime with the packages and dependencies you need. Get started for free by creating an account on the ActiveState Platform or logging in with your GitHub account.

Pip is Python’s package manager, providing essential core features for installing and maintaining Python packages and their dependencies. While many Python developers use Pip as a Dependency Manager, it was never intended to be used as one. Pip will not flag dependency conflicts. As a result, it will happily install multiple versions of a dependency into your project, which will likely result in errors.

If you choose to stick with pip, be aware that it has been integrated with higher-level tools, such as Pipenv which utilizes Pip’s command-line interface (CLI) to help perform enhanced dependency management in virtual environments. There are several different approaches to dealing with dependencies in Python, one of which is using Pip with Pipenv.

Another solution for better managing dependencies with Pip is to use it in conjunction with a requirements.txt file, which allows for the pinning of packages and their dependencies to specific versions (details below).

Pip is installed by default with any latest version of Python greater than v3.4. To check which version of Pip you are running, enter the following command in a terminal or command window:

You can also check to see if Pip is up-to-date:

The pip command installs packages and their dependencies from PyPI (Python Package Index) by default:

Pip relies on package authors to stipulate the dependencies for their code in order to successfully download and install the package plus all required dependencies from the Python Package Index (PyPI).

Instead, consider installing a pre-built runtime environment, such as Anaconda or Python by ActiveState, or else installing all required packages for your project from a requirements file.

A wheel is an archived Python project consisting of one or more packages and their dependencies. Pip is able to install packages configured with their dependencies, because most authors package their code as wheels by default before submitting to PyPI.

It is not necessary to provide the full wheel name. The package name is all that is required to run pip when installing a package from PyPI:

For example, the Twine package and its dependencies are provided in a Wheel named ‘twine-3.1.1-py3-none-any.whl‘ located in https://pypi.org/project/twine. 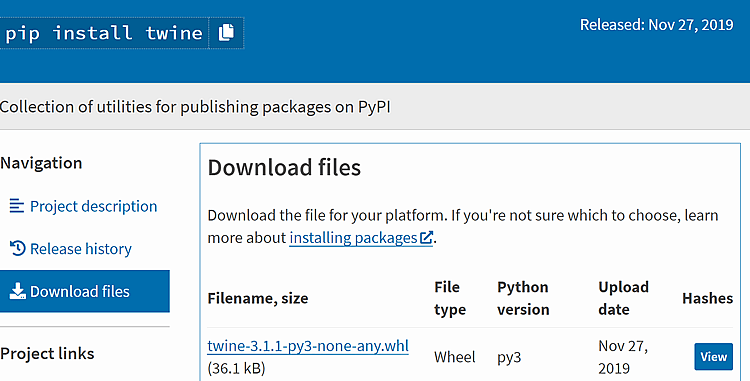 The requirements.txt example below resolves a dependency conflict between two packages, where <package1> and <package2> require different versions of the same dependency.

To install a requirements.txt file, cd into the directory where the file is be located, and enter:

Requirements.txt files can be used multiple times in a default single environment or in multiple virtual environments, as a method of version control to override dependencies with patches (different package versions).

Updating one or more packages in a project can result in dependency conflicts since newer package versions will often require newer versions of dependencies, as well.

To learn more about updating Python packages, refer to our Quick Read: How to Update all Python Packages.

You can try the ActiveState Platform by signing up for a free account using your email or GitHub credentials. Or sign up for a free demo and let us show you how you can better manage dependencies at your organization.