When managing Python environments, one of the key concerns is dependency management. Dependencies are all of the software components required by your project in order for it to work as intended and avoid runtime errors.

You can count on PyPI (the Python Package Index) to provide packages that can help you get started on everything from data manipulation to machine learning to web development, and more. This can be a huge time saver, but resolving dependencies required between all the packages you need can also be a huge time sink since pip doesn’t currently support dependency resolution. The ActiveState Platform is the only solution that currently supports both:

If you’re having trouble with dependency conflicts and resolution, try the ActiveState Platform by signing up for a free account.

For other dependency management issues, read on to learn about how to:

The rest of this document contains tools and strategies to help you manage Dependency Hell, but the only way to avoid it altogether is to use the ActiveState Platform, since it’s the only tool that will provide you with a definitive solution to a conflict. For more information on the ActiveState’s dependency conflict resolution process, refer to Dependency Resolution Optimization – ActiveState’s Approach.

Overall, dependency management is a combination of best practices and thoroughly understanding a toolchain that implements them. Tools for that purpose are discussed later in this page under the Virtual Environment Solutions for Managing Dependencies section.

Managing and Adding Dependencies To a Python Project

Pip is the de facto standard tool for installing Python packages and managing their dependencies. When you use pip to install packages, it automatically retrieves the package and all its dependencies from the Python Package Index (PyPI) and installs them locally on your system:

Unfortunately, pip makes no attempt to resolve dependency conflicts. For example, if you install two packages, package A may require a different version of a dependency than package B requires.

Pip can install from either Source Distributions (sdist) or Wheel (.whl) files. Wheels are a binary installable format that includes the package and its dependencies. If both sdisk and wheel formats are available on PyPI, pip will prefer a compatible wheel. If pip does not find a wheel to install, it will automatically build a wheel and install it for you.

Setuptools is a package development process library, and a popular long term standard for ensuring that projects get packaged with all the dependencies they require to run. Dependencies are defined in the install_requires section of setup.py files, and are automatically installed along with the packages that require them. Unfortunately, this method alone will not prevent conflicts from arising if packages need to share dependencies in the same environment.

Simply put, pip and setuptools have similar limitations in terms of dependency conflict. As a result, more advanced tools and methods for managing dependencies are required, such as virtual environments and lock files.

For more information on setuptools, refer to How to Package Python Dependencies for Publication.

Pipdeptree is a  tool for displaying installed Python packages in more of a visual dependency tree. This can be useful when trying to visualize a dependency conflict. However, Pipdeptree does not install packages and dependencies or provide conflict resolution.

Use Pipdeptree whenever you need help making the hierarchy of packages and dependencies in an environment more understandable. It can be used to display both packages that have been installed globally, as well as in a virtual environment.

For more information on working with PipDepTree, refer to How To Check For Python Dependencies.

Pipreqs is a tool that can generate a requirements.txt file containing the list of a project’s dependencies and their versions based on imports that it detects in the source code.

To generate a requirements.txt file for a project, and save it to the project location, enter:

Virtualenv is a low level tool, originally from Python 2, for isolating multiple projects in virtual environments that minimize the possibility of dependency conflicts.

In Python 3, VirtualEnv can be used with Venv to create virtual environments. Venv and VirtualEnv are similar, however Venv (unlike VirtualEnv) is included in Python 3.3+ and does not have to be installed.

Note that in Python 3.8, Virtualenv has been deprecated in favor of Venv. Venv is a lower level tool than Pipenv, described in the next section, and can be useful when Pipenv does not meet your needs.

Pipenv is a dependency manager that integrates Pip and Virtualenv in a single application. It can be used to create a virtual environment for each project, and automatically manage the dependencies within each of them.

Note: Pyenv is a Bash extension and will not work on Windows outside of the Windows subsystem for Linux.

For more information Virtualenv, Venv, Pipenv and Pyenv refer to How To Manage Python Dependencies With Virtual Environments.

The Python ecosystem features a number of third party package managers that have recognized the limitations of current solutions when it comes to dependency resolution. All of these alternatives are compatible with PyPI, but attempt to resolve dependency conflicts before they occur (ie., at time of installation).

The ActiveState Platform lets you automatically build a Python runtime environment from source for your project. The runtime includes a specific version of Python, as well as all the packages and their dependencies (including linked C libraries) required for your project.

The Platform’s Solver component automatically resolves all dependencies where possible, and flags unresolvable conflicts so you can manually work around them by simply following the provided instructions. 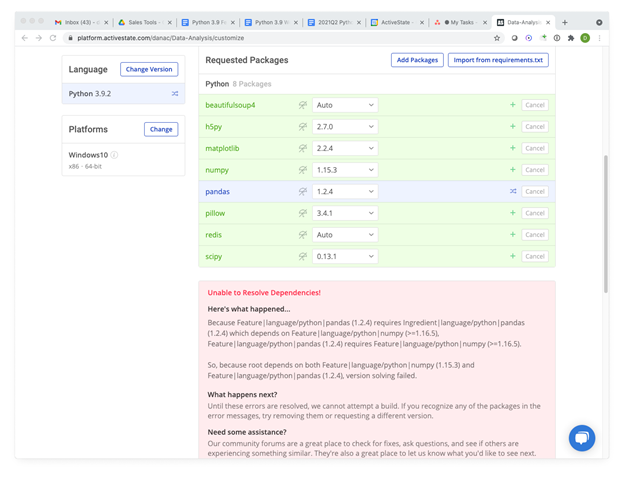 Once your project’s runtime is built and packaged for your Linux, Windows, or macOS, the State Tool CLI can be used to automatically install it into a virtual environment so it remains isolated from other projects/global installations. In addition, the ActiveState Platform gives you a way to bake security right into your language builds, identifying security vulnerabilities, out-of-date packages, and restrictive licenses each time your application is run.

Poetry is a Python package and dependency management tool that provides dependency resolution out of the box. Project dependencies are managed in a pyproject.toml file, which is automatically updated whenever the poetry install command is run.

Note that although Poetry installs packages from PyPI by default, they do not contain setup.py and are not compatible with pip. Poetry does things differently.

For more information on Poetry, refer to How To Use Python Dependency Management Tools.

Conda is a package, dependency, and environment management tool for Anaconda Python. Some of its basic features are similar to Pip, Virtualenv, and Venv. However, it is a separate, enhanced tool designed to work in Conda environments only.

Conda is a command-line tool included in the Anaconda Python distribution and can be run from the Anaconda Prompt in Windows or in a Linux terminal. It is usually quicker and more practical to use Conda than the Anaconda Navigator GUI ( Graphical User Interface) which is similar in function.

Conda not only provides virtual environments that isolate or sandbox each project to prevent dependency conflict between them; it analyzes each package for compatible dependencies and potential conflict during installation.  If there is a conflict, Conda will inform or flag you that the installation cannot be completed.

For more information on Conda, refer to How to Manage Python Dependencies with Conda.

There are several different approaches to dealing with dependencies in Python. Many ecosystems have tools for pinning package versions and only doing controlled upgrades, but those tools have their own downsides. What if you are building with more than on language? Wouldn’t it be nice to have a user-friendly system for managing your dependencies?

How To Check For Python Dependencies with Popular Package Managers

How To Download Python Dependencies – Everything You Need To Know