Home » How To Position Buttons In Tkinter

How To Position Buttons In Tkinter

When a Python GUI application is designed with Tkinter, widgets (including buttons) require programming so that the underlying application logic can respond to mouse clicks and other actions. Additionally, in order for them to work as intended, widgets need to be positioned intuitively for the user.

Tkinter has three built-in layout managers that use geometric methods to position buttons in an application frame: pack, grid, and place.

How to Position Buttons With Pack

Pack() has three options you can use: side, fill, expand.

Read the detailed explanation on how to position button with pack() along with a video.

How to Position Buttons With Grid

Grid() is used to position buttons based on row and column coordinates on a grid in a frame similar to a spreadsheet.

Read the detailed explanation on how to position button with grid() along with a video.

How to Position Buttons With Place

Place() is used to position buttons based on x,y coordinates in a frame.

Read the detailed explanation on how to position button with place() along with a video.

Learn more about Tkinter and how to install it here.

If you want to take advantage of the latest version of Tkinter, you’ll need to install a version of Python that supports Tcl/Tk 8.5 or greater. This will provide you with the Ttk (Tile extension integrated into Tk), which is required in order to run the current Tk widget set.

If you’re one of the many engineers using Python to build your algorithms, ActivePython is the right choice for your projects Get The Machine Learning Packages You Need – No Configuration Required. We’ve built the hard-to-build packages so you don’t have to waste time on configuration…get started right away! Learn more about ActivePython here.

What is Tkinter used for and how to install this Python Framework? 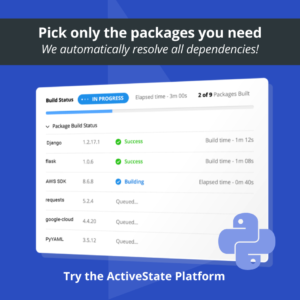