How to create a virtual Python shell

Try a faster and easier way to manage your Python dependencies. Use Python 3.9 by ActiveState and build your own runtime with the packages and dependencies you need. Get started for free by creating an account on the ActiveState Platform or logging in with your GitHub account.

By default pip installs third party packages from the Python Package Index (PyPI). In corporate environments located behind a firewall, you may require the use of an HTTP proxy server to redirect internal traffic to pypi.org, or any other repository that hosts Python packages.

What is a Virtual Python Shell?

A virtual Python shell is used to execute commands and compile Python code in a virtual environment on your local machine.

Why Use a Python Virtual Environment

A Python virtual environment is a local installation (as opposed to global installation) that has its own directory system (including site-packages), Python interpreter, and shares the standard Python library. Virtual environments allow you to run multiple Python projects and/or multiple versions of Python on the same local system without worrying about dependency conflicts between installations.

Python has many different ways to create virtual environments, each with its own pros and cons. Which one you should use depends on your individual project needs:

Venv and virtualenv have similar features and command structure, but venv has fewer options. To see all venv options, enter:

If you are working with Python 3.8 or later, you can create a virtual environment shell by doing the following:

If you are working with Python 3.7 or earlier, you can create a venv virtual environment by doing the following:

Virtualenv has been deprecated in Python 3.8. However, it has more features than its successors (venv and pipenv), and can be useful in certain low level conditions with Python scripts. Virtualenv can be implemented in Python 2.7 and 3+, and now provides additional virtualenvwrapper commands that makes it much easier to use.

To create and then activate a virtual environment with virtualenv, enter the following:

Activating a virtual environment sets it as the default version of Python used by your system.

To deactivate a virtual environment once your work is complete, enter:

Pyenv is a high level Python version manager that can be used to:

Note that pyenv is a Linux only bash extension, and will not work on Windows or Mac OS X.

For information about Pyenv, refer to:  Dependency Management with Virtual Environments

Pipenv is a tool for managing dependencies and workflow in virtual environments. It uses pip and virtualenv underneath, and simplifies their usage with a single command line syntax. Like venv, pipenv automatically creates a separate virtual environment for each project.

Pipenv can be installed with the following command:

To install, upgrade or uninstall packages using pipenv, just replace the pip command with pipenv. For example, the following command installs a specific package from PyPI:

You can also install packages from locations other than PyPI. For example, to install a specific package from a Github repository, enter:

To activate the virtual environment, navigate to your project directory and enter:

For more information about Pipenv, refer to: Dependency Management with Virtual Environments

Keep your projects sandboxed on your machine with a cross-platform, universal virtual environment solution that’s quicker and easier to use than venv, but still lets you run multiple versions of Python on your machine without worrying about dependency conflicts. 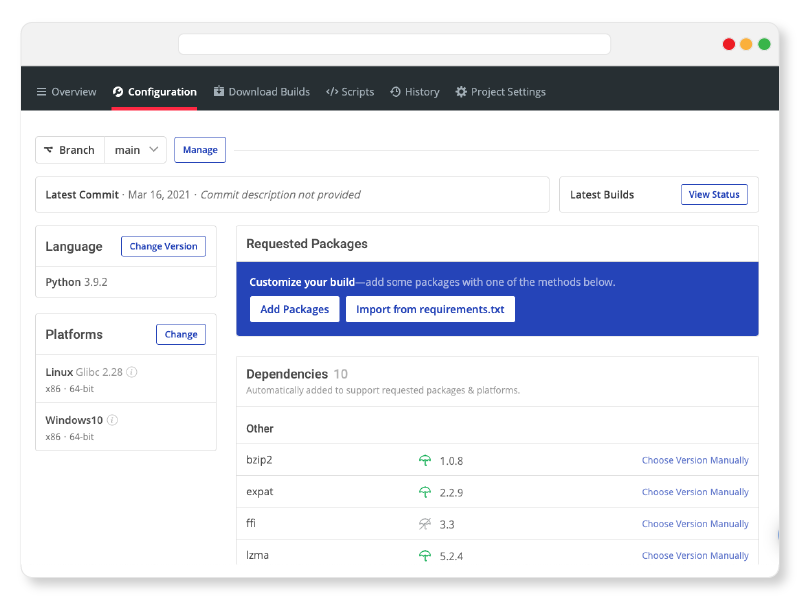 The ActiveState Platform automates the building of Python runtime environments from source code, and then installs them into virtual environments by default. You can either create a complete environment for your project in the Web GUI, or else use the State Tool to state install <package_name> or state import <requirements.txt>

The ActiveState Platform will automatically resolve all dependencies if it can, and flag unresolvable conflicts so you can work around them by pinning problematic dependencies and sub-dependencies.

To switch between projects, run:

To get started, install a recent version of Python by ActiveState.

Python by ActiveState In Action

How To Manage Python Dependencies with Virtual Environments

Blog: How to manage Python environments: Global vs Virtual