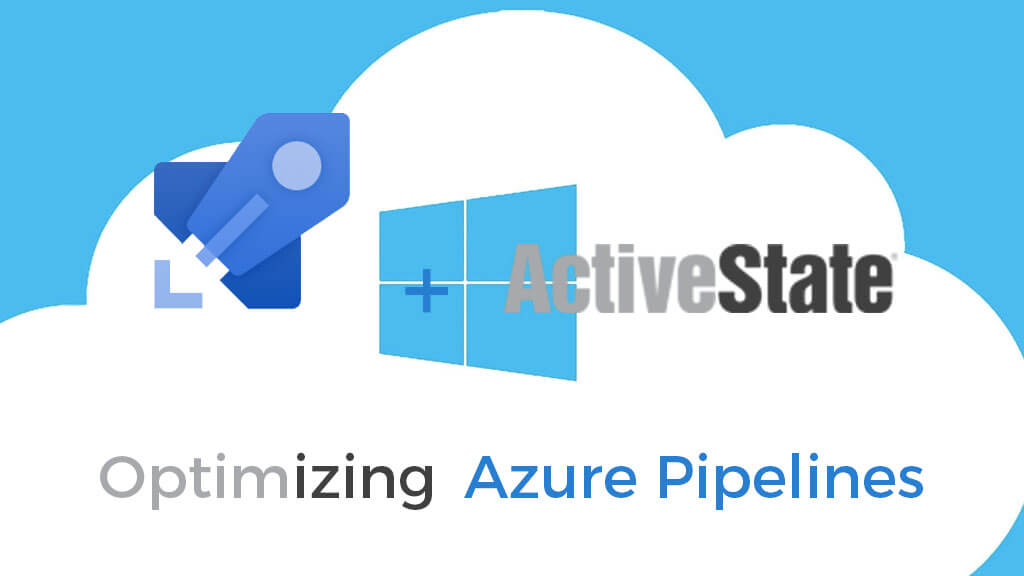 This blog is part of my ongoing Continuous Integration/Continuous Delivery (CI/CD) series. This time we’ll shine our spotlight on Microsoft’s CI/CD offering, which is part of their Azure Cloud family. Microsoft offers both on premise and cloud CI/CD services, and has different licensing plans for each:

In this post, I’ll explain how to set up a CI/CD pipeline on Azure Pipelines for a Python project that incorporates:

Note that Azure Pipelines has had some troubles in the past maintaining a working Python environment because (like most CI/CD vendors) they don’t precompile and verify the runtime. The ActiveState Platform is designed to solve this problem both for CI platforms and production deployments. The ActiveState Platform CLI, the State Tool will be utilized to pull down a pre-built custom runtime environment, which includes a version of Python, as well as all the packages and dependencies the project requires.

As is typical of Microsoft’s Enterprise offerings, the Azure DevOps management hierarchy is based on users and their memberships/rights. A user can be a member of multiple organizations, including a “personal organization”, which might have different rights and features/limitations than their corporate organization. Projects are created under organizations, and will require some basic options to be selected.

Other than project name and description, you will need to set project visibility to Public or Private (similar to ActiveState Platform projects). Microsoft also provides options for Version Control (Git or legacy support for Team Foundation), as well as a way to link Azure DevOps to a software development process your team might be following.

When starting up a new project, Azure Pipelines will try to detect your project type (after getting access to the source code), and offer you suitable defaults from a list of stock configurations it has for common language, framework and deployment configurations.

But you can also create a YAML file yourself by starting with one of the examples and editing it in the quite helpful editor. The editor has built-in “Tasks” on a pane on the right hand side, which are pre-packaged scripts for commonly used tasks that you can easily insert into the YAML file. There’s also support for variables, which are used to store values or secrets that can be used in the pipeline configuration.

It will take a while to learn all the available features and be able to use the full power of the Pipeline scripting, but Azure Pipelines makes it quite easy to get started with its wizard-like interface.

Getting Started with Azure Pipelines

Now that you have some feel for the Azure DevOps service and its Pipelines feature, all you need to do to get started is:

Setting up Azure Pipelines for your Project

To start, let’s create a project in Azure Pipelines:

1) Log into Azure DevOps and create a new project.

2) Choose the GitHub option, and authorize Azure Pipelines to access your GitHub account. In actual use of Azure Pipelines this authorization process could be complicated depending on the type of project you’re building and the type of organization you’re in (especially if in an organization already using Azure services and managed by a different group), so you might want to refer to their product documentation to decide which type of authentication you should choose.

3) Select the repository you forked and “Approve and Install” the Azure Pipelines app on Github.

4) Azure Pipelines will try to detect your application and offer a configuration suitable for it.

6) In the next screen you can review the YAML file and then click Run to start the job.

Let’s pause here for a moment and have a closer look at the pipeline configuration:

The Azure Pipelines configuration is straightforward on the surface, but it takes some time to get a multi-platform build set up properly. Our example here uses -jobs, which sets up Linux, macOS, and Windows jobs running on VMs, and executes them in parallel if resources are available. Each job has a name, a pool, which defines the VM image being used, and a number of steps, which are individual scripts that will be executed in sequence using different shells on each VM.

The only global setting in our example pipeline configuration is the trigger, which contains a branch name off of our GitHub project. Any update in this branch will kick off the execution of this pipeline. More complicated triggers can also be set up for different use cases.

For each job, the steps are conceptually doing the same thing, but with some differences to overcome OS-specific issues:

7) When you run the pipeline, you’ll see a Summary screen with details of your Pipeline and its scheduled jobs.

After some time, the tasks should finish executing and complete successfully. At any time during this period, you can click on the job names to see detailed information about each job and its steps. You can also click on the step names to see live logs for each step.

8) Any update you make to your trigger (e.g. commits to the branch) will automatically run the pipeline.You can access the logs for each run from the Pipelines screen, which you can navigate to by clicking on the Pipelines folder.

Even though Microsoft has existing solutions for build and source code management, enterprise adoption of the cloud has driven the need for a CI/CD solution on Azure. But when it comes to  services from the big cloud vendors (Amazon, Microsoft, Google, etc.), CI/CD is treated as “just another service” rather than being a focus as it is for CI/CD-as-a-product companies (e.g. Travis or Circle CI). Azure Pipelines suffered from this lack of focus in its initial release. For example:

Even though Azure Pipelines has improved over time, some of these issues still exist. Stability of builds is of particular concern, which may be a result of the large amount of options and freedom provided in creating pipeline scripts rather than anything due to the underlying cloud infrastructure.

As for feature/functionality, Azure Pipelines now ticks all the required boxes, including multi-platform support. The pipeline configuration script is good, but compromised by the fact that you have to resort to some obscure commands to achieve continuity between steps. Note that this is not unique to Azure – we’ve also seen the same in Google Cloud Build. This is probably the price that needs to be paid in order to achieve the kind of scalability these systems offer, but it doesn’t make an end user’s life any easier. Regardless, Microsoft still sees CI/CD as an important part of their DevOps tools portfolio, and continues to improve integration with the rest of their Azure cloud offerings.

Azure Pipelines is a good option for users that require CI/CD for their Windows applications, or their cross-platform applications that also need Windows support. Being integrated into the Azure Cloud ecosystem provides advantages to corporate users who have already invested in Azure, especially in terms of security and access control. Note that Azure Pipelines is not as tightly integrated with Azure as Google Cloud Build is with GCP, so using it outside the Azure ecosystem still provides end users with full functionality.

One of the key decision criteria when choosing between CI/CD solutions is the ability to integrate with an organization’s existing toolchains and processes. Azure Pipelines provides basic support “out of the box”, but is also quite extendable and flexible. But with flexibility comes complexity. As a result, integrating Azure Pipelines with any reasonably sophisticated software development workflow can be both complex and costly.

The ActiveState Platform, in conjunction with the State Tool, simplifies development workflow and CI/CD setup by providing a consistent, reproducible environment deployable with a single command to developer desktops, test instances and production systems. In contrast to the Docker approach to environment consistency and reproducibility, which is based on IT requirements, ActiveState offers a developer-friendly way of synchronizing environments across dev, CI/CD and production systems and can support both container-based as well as VM-based CI/CD systems.