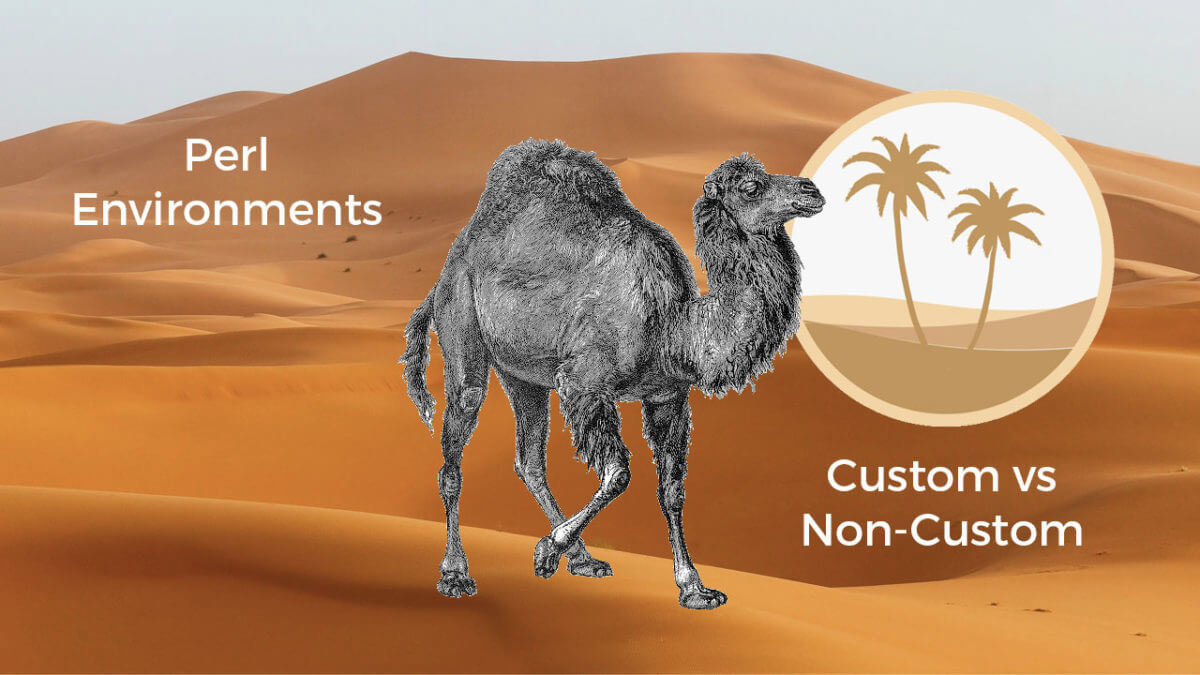 Summary – Creating a custom Perl environment for each project that contains just the required dependencies for that project can reduce vulnerability incidents, improve license compliance, and result in more consistent environments across dev, test and production. But traditionally, one-off, non-standard Perl environments lead to increased costs in terms of resources to create, manage and update them.

Instead, consider using the ActiveState Platform to automate these tasks for you, decreasing costs while improving Perl environment security, compliance & portability — and you’ll also gain better dev tooling as a side effect.

As an experienced Perl developer, you probably have a preferred way to manage your core language and dependencies (ie., your Perl environment) whenever you start a new project. Unfortunately, your individual preferences can result in pain downstream when the production Perl environment doesn’t exactly match the one in your development environment or even your test / CI/CD environment.

There are any number of reasons for this, but most commonly:

The trend these days is to standardize on containers, which provide for identical Perl environments across dev, test, and production by delivering a common environment every faction can use. But whether you use containers or not, a production Perl environment that contains a superset of all required modules/dependencies can lead to:

All of which translates into increased risk. This post examines how security and compliance risks increase with larger Perl environments, and what you can do to mitigate them.

Synopsys conducts thousands of open source audits each year, and delivers the anonymized results in their annual “Open source Security & Risk Analysis” report. The 2020 report is typical of what they continue to find, year after year:

This time around, the study included 1,250 commercial codebases, 30% of which included Perl. While the report does not provide a breakdown by codebase, it’s still instructive in showing that open source code bases are highly prone to vulnerabilities, licensing conflicts and staleness.

Our hypothesis is that the larger your Perl environment (i.e., the more dependencies included), the more vulnerabilities and licensing conflicts will occur, and the more difficult it will be to keep up to date.

Of course, if you keep your Perl environment up to date, and consistently patch or upgrade it in response to vulnerabilities, you can maintain a large Perl environment without sacrificing security. Unfortunately, as the Synopsys report points out, most organizations are unable to keep things up to date, with >80% of the codebases they examined having components 4 or more years out of date or having no development activity in the past 24 months.

There a number of reasons for codebases to go stale, but some of the most common ones are:

Whatever the reason, the result is the same: the larger the Perl environment, the more potential for dependency vulnerabilities to crop up, which are unlikely to be resolved in a timely manner. Application security suffers.

Again, adding more dependencies does not necessarily result in more license issues since some organizations strictly enforce the dependencies you can add to a Perl environment by license. Unfortunately, this would seem to be a minority of organizations given the Synopsys report results, which indicated that two-thirds of codebases across 1,250 software, healthcare, and financial services organizations have license conflicts.

License conflicts occur when a codebase contains one or more modules whose licensing terms appear to be at odds with the overall license of the codebase. Adding more modules can lead to a proliferation of different licenses, each of which needs to be identified and verified compatible with the application in which it’s included. Software vendors need to be especially cautious, as they may find themselves in situations where they need to release the source code for an application.

License conflicts typically result in one of three major impacts:

It takes work to create and maintain a Perl environment for every project in an organization, eating up development time to deal with something that’s really just “plumbing.” Worse, many organizations require their lawyers to review the open source licenses every time a new Perl environment is created or a change is made, significantly delaying time to market. As a result, some organizations have created dedicated teams that do nothing other than build, maintain, and update Perl environments. But that’s a luxury most organizations simply can’t afford.

As a result, no dependency or OS expertise is required – a junior developer can, in about an hour, configure and build the Perl environment for a project. This Perl environment then acts as a single source of truth for the entire organization to pull into their development environments, CI/CD containers, and production workloads, ensuring consistency and reliability.

When updates are made (either to add new/new versions of dependencies or else remove them), the Perl environment can be rebuilt and redeployed with a single command using the State Tool, a command-line interface (CLI) tool for the ActiveState Platform. If something goes wrong, you can always roll back to a previous version of your Perl environment because the ActiveState Platform retains copies of older dependencies, including transitive dependencies. You’ll never find yourself in a “can’t reproduce the build” situation again.

In this way, organizations can easily and cheaply (in terms of time and resources) create Perl environments on a per-project basis, ensuring that each Perl environment contains the minimum amount of dependencies required to run the project.

The ActiveState Platform pulls Perl modules from standard repositories like CPAN on a regular basis, ensuring that dependency versions are always up to date. Where required, vulnerabilities will be patched on import.

Today, the ActiveState Platform offers an indemnification option that indicates which dependencies/versions of dependencies:

So you can make better decisions about which dependencies (or version of a dependency) to add to your Perl environment.

On our roadmap is the ability to programmatically enforce which dependencies developers are allowed to add to their Perl environment based on which licenses are permitted by corporate policy. Eliminate license conflicts.

You can try out the ActiveState Platform’s capabilities today by creating a free account, which will allow you to:

Install Perl 5.32 on Windows by running the following command at a CMD prompt:

You can then run “state install <modulename>”. See our CLI Quick Start Guide for more commands.