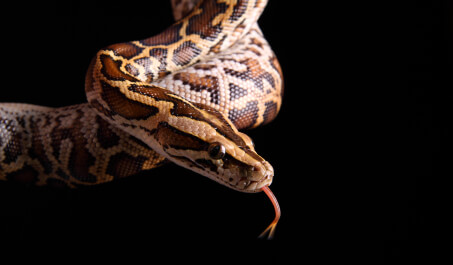 Earlier this month, celebrations all over the world rang in the Chinese New Year, marking the Year of the Snake. Florida held its very own fireworks event, but I doubt the snakes appreciated it.

Over 1,600 hunters came from 38 states and Canada to participate in the 2013 Python Challenge. They trekked through more than a million acres of swamps in the Everglades to kill as many Burmese pythons as possible. The Florida Fish and Wildlife Conservation Commission who organized the month-long competition wants to see the python dead because it is an invasive species, and a threat to the Everglades ecosystem and native wildlife.

As the 2013 Python challenge just came to an end with a record count of 68 dead Burmese pythons, another famous python is now at risk of losing its head.

On Valentine’s day, the Python Software Foundation reported in a blog post that the Python trademark is at risk in Europe. “There is a company in the UK that is trying to trademark the use of the term "Python" for all software, services, servers… pretty much anything having to do with a computer,” writes Van Lindberg, chairman of the PSF.

Lindberg explains that the PSF contacted Veber, the UK- based internet hosting service provider who owns the python.co.uk domain name, to discuss the matter. “They blew us off and responded by filing the community trademark application claiming the exclusive right to use "Python" for software, servers, and web services – everywhere in Europe, “ Lindberg writes.

As a result, the PSF is now for the first time in its history taking legal action to protect Python’s intellectual property. To oppose the community trademark application, the PSF requires statements from companies using Python in the European Union.

Lindberg’s post made the Python community mad as a cut snake. Pythoneers suddenly lost their zen, and demonstrated that when it comes to protecting the Python trademark, the new aphorism of choice is Ugly is better than Beautiful. Since Lindberg’s blog post was published, Veber staff received thousands of phone calls and emails, including death threats.

It will be interesting to watch how the story unfolds, particularly as Python is not exactly the new kid on the block, and has a long history. Invented in the late 1980s by Guido van Rossum, the language’s implementation started in December 1989.

The language does not actually owe its name to the snake, Instead, the creator of the language was inspired by the television series Monty Python's Flying Circus, although it might now be more appropriate to compare Python to the Burmese beast when it comes to growth. The Burmese python is one of the largest snakes in the world, and the biggest one caught in Florida measured over 5 meters (17 feet). As the one of the top programming languages in the world, Python’s growth is also impressive. Competing with PHP to become the most popular interpreted language, Python is currently ranked seventh on the TIOBE Programming Community Index, an indicator of the popularity of programming languages. ActiveState CEO Bart Copeland already blogged in 2010 about why Python has such high usage and growth.

We are proud to say that ActiveState was the among the founding sponsors of the PSF and is still a current member. We have developed a Python distribution, ActivePython, over 12 years ago, and released the first 1.6 beta version in August 2000.  “ActiveState was looking to branch out beyond Perl in the dynamic language space where we had been strong right from the start,” remembers Jeff Hobbs, ActiveState's CTO and VP, Engineering. "It was a natural progression to add Python to our existing Perl efforts. We later followed with Tcl and then added tools support for other dynamic languages, such as PHP, Ruby and Node.js.”

As for trademarks, ActivePython has had a EU trademark for some time, and ActiveState has been selling ActivePython in the European Union for years — notably SAP ActivePython OEM.

ActiveState Welcomes Year of the Snake

Over the years, ActiveState has developed a variety of cool Python-related initiatives, and since this is the Year of the Snake, it is time to celebrate. In the next few weeks, watch for more blog posts on everything Python: the problems we solve with PyPM, how we cook delicious Python recipes, and how Python is tied to Komodo. We will also share news from Activators reporting from the PyCon event in March.

Home » ActiveState Blog on » Uncategorised » Year of the Snake? I Think You Mean “Year of the Python…”
python