Pip tools are a set of third party command line tools designed to help with Python 3 dependency management by keeping dependencies up to date, even when you have them pinned.

You can install it by running the following command:

You can then run the following command to automatically create a requirements.txt file based on your setup.py or requirements.in file:

You can even update specific packages to the latest version (or any specific version) by running the following command:

So far so good, but pip tools (like pip itself) does not do Python dependency resolution, which means that upgrading is a crapshoot: you may pull in dependencies or transitive dependencies (ie., dependencies of dependencies) that don’t work together, thereby corrupting your environment.

Unfortunately, most real world Python projects are more complicated than those supported by pip tools. For example, pip tools currently provides no way to:

If you require any of these features, consider the ActiveState Platform, which offers advanced dependency management for Python projects.

For each Python project the ActiveState Platform provides: 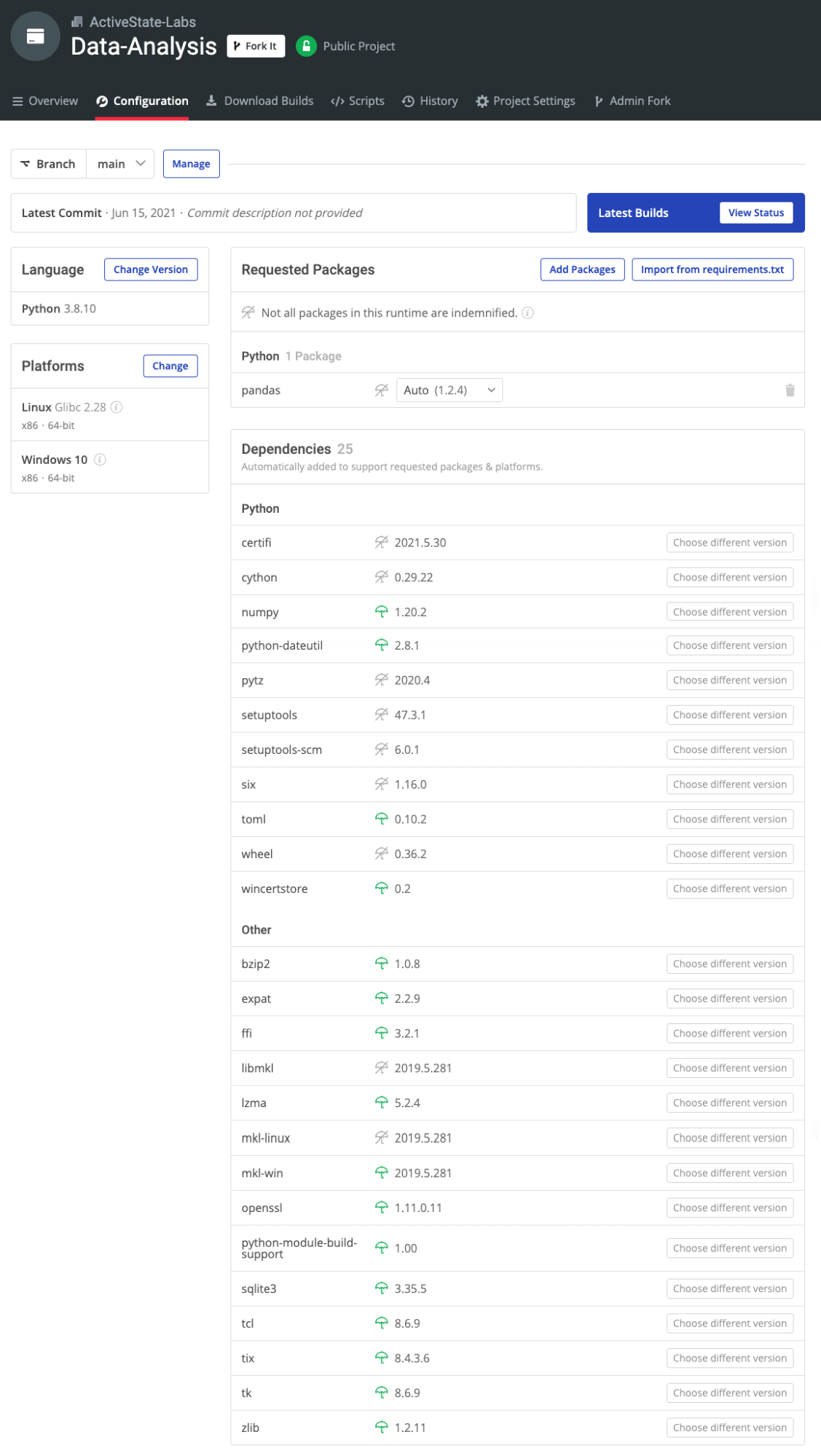 As a result, you can easily distinguish between top level packages you explicitly included in your project versus their dependencies that were pulled in automatically.

Python dependency resolution refers to the ability for a package manager (like pip) to be able to not only pull in all the dependencies required by the packages in your project, but also be able to ensure they are all compatible with each other. Unfortunately, neither pip nor pip tools are able to accomplish this.

By way of comparison, the ActiveState Platform will not only resolve all dependencies to ensure they work together but will also flag unresolvable conflicts and even suggest a manual workaround to the problem. 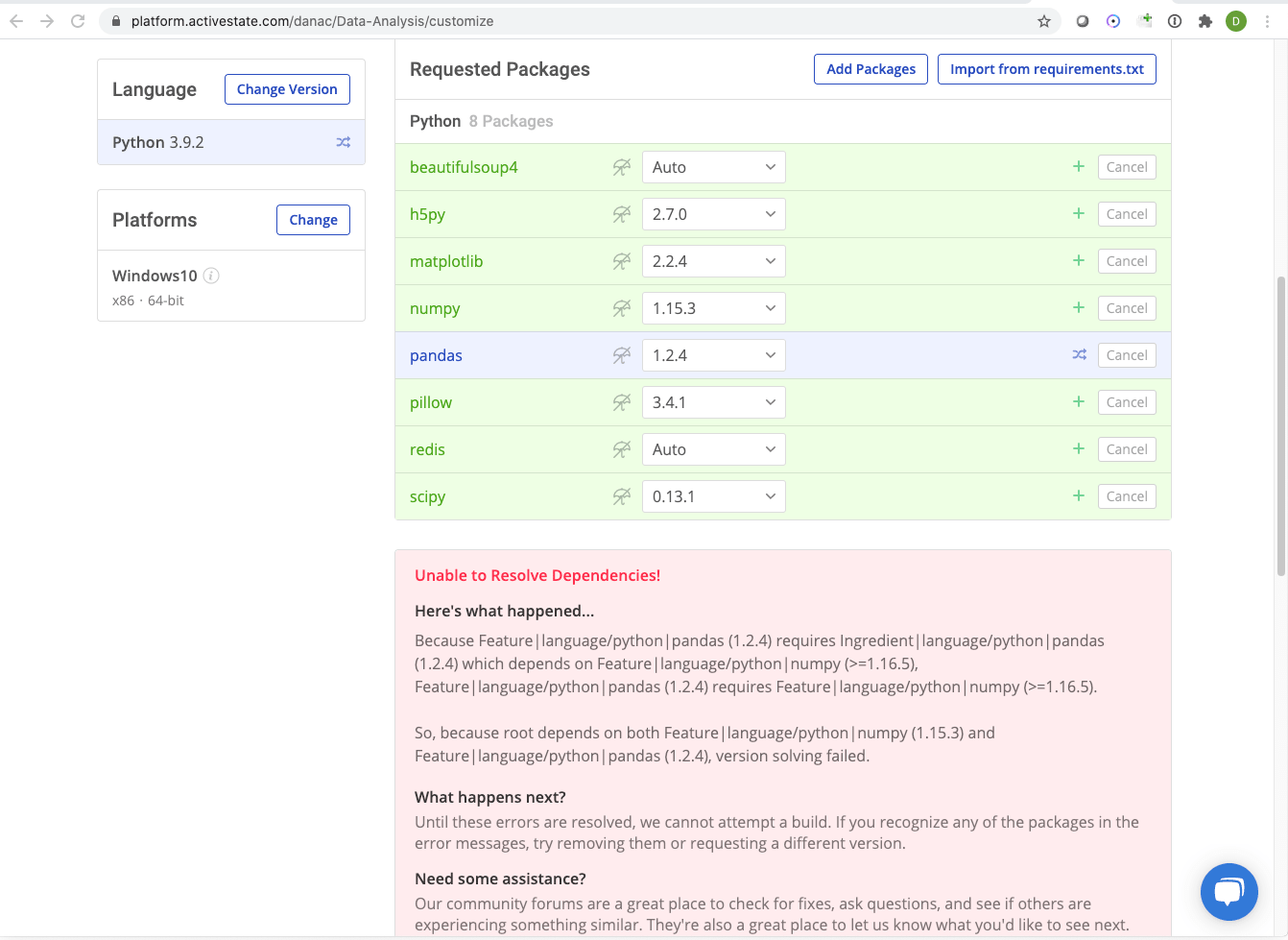 By following the instructions and selecting a more recent version of pandas will resolve the conflict. Note that when upgrading a package, the ActiveState Platform will show you all the cascading configuration changes so you can know the ramifications of any change to your environment BEFORE you commit to the update.

As most Python software engineers know, the best practice is to install each of your projects in a virtual environment in order to isolate dependencies and prevent conflicts.

The ActiveState Platform provides natives support for virtual environments, which means that whenever you install a project using our command line interface, the State Tool will create a virtual environment (similar to venv, virtualenv or pipenv) on your local system and populate it with the runtime environment, including:

The runtime environment is pre-compiled from source code by the ActiveState Platform (including linked C libraries) in a reproducible manner. As a result, deployment happens much faster than if every dependency was independently retrieved from a repository (like PyPI or GitHub) in a serial manner.

Updates to the local environment happen in the same: a single command downloads and installs all updated dependencies.

A separate configuration of the Python runtime environment is often required for each environment the application is to be developed, tested and run in. The most common way to do this is to create a default configuration (typically for the development environment) and have the other environments simply inherit the dependencies with minor differences.

However, problems arise when the configuration is targeted at a different operating system or platform, such as Python 2, which might arise when doing migration work. Simple inheritance is not enough.

The ActiveState Platform provides the flexibility to create multiple child configurations from a parent configuration and:

Ready to see for yourself? You can try the ActiveState Platform by signing up for a free account using your email or GitHub credentials. Or sign up for a free demo and let us show you how you can better manage dependencies.

What are some benefits of PIP-tools?

Pip tools are a set of third party command line tools designed to help with Python dependency management by keeping dependencies up to date, even when you have them pinned. Pip tools can:

However, advanced dependency management functionality, such as dependency resolution and dependency conflict management are lacking. As a result, upgrading may or may not corrupt your environment.

To avoid Python environment corruption, use a package management solution like the ActiveState Platform, which not only resolves dependencies but flags and provides manual solutions for dependency conflicts. Try it yourself by signing up for a free account.

How do I use PIP-tools?

You can use pip-tools to help with dependency management in multiple ways, including:

Unfortunately, pip-tools will not resolve dependencies on upgrade, potentially corrupting your environment. Instead, try using the ActiveState Platform’s command line interface the State Tool, which will:

You can download the State Tool for free and start working with it by referencing our User Guide.

What can I use instead of PIP?

Pip-sync is a feature of pip-tools, which allows you to update a virtual environment by installing, upgrading, or uninstalling all dependencies necessary to match the contents of your requirements.txt file.

You can run pip-sync with the following command from within your virtual environment:

Since environments can often get out of sync with the requirements.txt, this a good way to realign it. However, because pip-tools does not perform dependency resolution, you may be left with:

Ready to see for yourself? You can try the ActiveState Platform by signing up for a free account using your email or GitHub credentials. Or sign up for a free demo and let us show you how you can better manage environment sync.