How to Install Pip on Windows

Pip is the standard package manager for Python. It enables the installation and management of third party packages that provide features and functionality not contained in the Python standard library. Newer versions of Python (Python 2 >= v2.7.9 or Python 3 >= v3.4) come prepackaged with pip by default. Pip is also included in the virtual environments created by virtualenv and pyvenv.

But if you’re using an older version of Python, pip will need to be manually installed. This tutorial steps through how to install Pip on Windows, and explains how to keep it updated.

If pip is installed, you’ll see something similar to the following output:

You should see something like the following if Python is installed:

If you do not have a version of Python installed, you can quickly download and install a recent version of ActivePython.

How to Install Pip with get-pip.py

If the file is not found, you may need to first navigate to the directory containing the  get-pip.py file. On installation, you should see something similar to the following:

This command will also install setuptools and wheel if they are not already installed. Setuptools is a suite of configuration enhancements to the Python distutils that facilitates building Python distributions. It is required to install source distributions, or “sdists,” a distribution format that provides the metadata and source files needed for tools like pip.

For further instructions on how to install packages with pip, refer to our guide to Python Package Installation on Windows

One of the most common problems with running Python tools like pip is the “not on PATH” error. This means that Python cannot find the tool you’re trying to run in your current directory. In most cases, you’ll need to navigate to the directory in which the tool is installed before you can run the command to launch it.

If you’d rather run pip (or other tools) from any location, you’ll need to add the directory in which it’s installed as a PATH environment variable by doing the following:

Pip is a key tool in the Python ecosystem, and as such is updated on a regular basis. Changes can always be found in the release notes for each version. In order to keep your version of pip up to date, you can run the following on the command line:

This command will uninstall the outdated version of pip first, and then download the most current iteration.

It’s also possible to downgrade to a previous version of pip, in case a newer version is causing unexpected compatibility errors. For example, to downgrade to pip v18.0 run the following command:

Try the ActiveState Platform to build Python packages faster and safer. Create a custom Python runtime for your next project. Pick just the packages you need, and we’ll automatically resolve all dependencies, build it (including C code) and package it for your platform.

How ActiveState Can Help 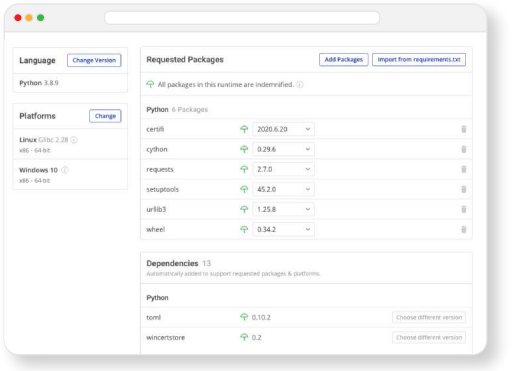 Ultimately, developers that are willing to adopt the ActiveState Platform will spend less time wrestling with tooling and more time focused on doing what they do best: coding.

Why is pip install not working?

If pip is not working on Windows, it’s probably because it hasn’t been installed as a PATH environment variable. You can either:

How do I install pip on Windows?

Pip is installed by default with most Python distributions, but to install pip on Windows you have two options:

How do I install the pip package manager on Windows 10?

Pip is installed by default with most Python distributions, but to install pip on Windows you have two options:

How do I know if pip is installed?

Verify that pip is installed by running the previous command to check the version. Navigate to the installation location (C:Python33Scripts by default) and run:
pip --version