The phrase “Python Package” is an overloaded term, being associated with everything from .py files to .tar archives to .whl distributions. This quick read introduces the various ways that Python code has been made available for use, as well as how to work with them.

No matter which type of package you prefer to work with, you should always build Python packages from source to ensure against compromised binaries. The ActiveState Platform automates building Python packages (including linked C libraries) so you can gain maximum security with minimal effort. Try it now by creating a free account.

When you pip install a Python distribution that incorporates a wheel, pip will install all the files specified in the wheel.

When installing or updating Python packages, it’s not uncommon to run into issues with permissions, incompatible libraries, and environments that suddenly become unusable. To avoid these kinds of pitfalls, there are a number of simple best practices you can follow to more easily manage your Python packages.

Global or System-wide Installations – whenever possible, avoid relying on Python packages that are installed globally in an OS-dependent location for your projects (many operating systems install a system-wide version of Python by default). Issues that can arise with globally installed Python packages include:

Virtual Environment Installations – a key best practice is to always create a new virtual environment for each and every project. For example:

Virtual environments avoid dependency conflict issues that arise when you install a newer version of a Python package for your latest project that overwrites an existing version you still require for an older project. This happens because only one version of a Python package can be installed at a time for a given Python interpreter. Instead, always create a separate environment for each project in order to manage each project’s Python packages individually, minimizing version conflicts.

Any well maintained Python package is constantly being upgraded and improved. The source code for the latest version of non-commercial packages can typically be found on Github/Gitlab, and the latest packaged version can be found on Python’s central repository, the Python Package Index (aka PyPI).

Python packages are typically updated in order to fix a critical bug or vulnerability. But when updating versions, care should be taken to ensure the environment is not compromised. Python provides the option to pin packages to a specific version in order to ensure it’s not accidentally updated. Most commonly, this is done in a requirements.txt file.

The Python requirements.txt file is used to list all the packages incorporated in a Python project. In the requirements file, you can specify which package versions your project supports. For example:

Non-pinned packages can be updated one at a time, or all at once across an entire environment or developer’s system. For more information, see Update all Packages. 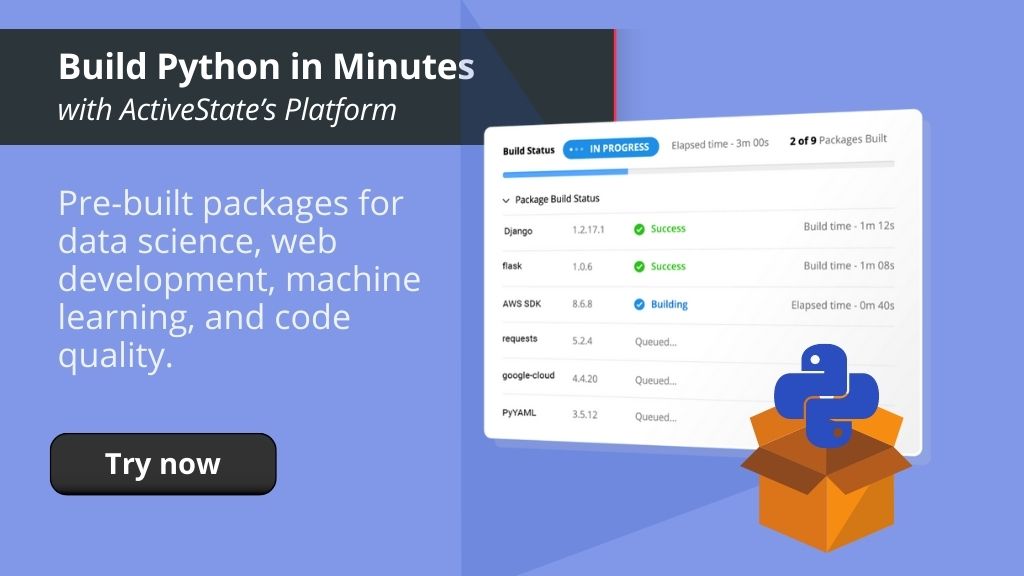 As Python developers, we’re tired of the hassles Python package management leads to:

We love pip, as well as the myriad of other Python package managers that have been introduced to tackle the problems listed above. It’s just that they were never designed for modern Python development at scale. In this post, I’ll walk you through how we’ve fixed these headaches with the ActiveState Platform, but the TL;DR is:

You can try it out for yourself with our Python 3.9 offering while you’re reading by running the following command:

The Future of Python Package Management

Ultimately, developers that are willing to adopt the ActiveState Platform for Python package management will spend less time wrestling with tooling and more time focused on doing what they do best: coding.  Ready to give it a try? Install Python 3.9 by using our command line code snippets above. Or head here to read all about it!

How To Install Python Packages Using A Script

How To Update All Python Packages