Try a faster and easier way to work with Python packages like Exchangelib. Use Python 3.9 by ActiveState and build your own runtime with the packages and dependencies you need. Get started for free by creating an account on the ActiveState Platform or logging in with your GitHub account.

Pip/pip3 is the official package manager for Python, and is the tool recommended by the Python Packing Authority (PyPA) for installing Python packages. The term ‘pip’ is used interchangeably with ‘pip3’ in this Quick Guide.

By default, pip installs packages and all their required dependencies from the Python Package Index (PyPI), using the command:

However, pip doesn’t currently support dependency resolution, which can lead to corrupted environments. To avoid this, you may want to try the ActiveState Platform, which is the only Python package management solution that automatically resolves dependencies, flags conflicts, and will even suggest a manual workaround to resolve the conflict. Get started with the ActiveState Platform by signing up for a free account.

Git is a Version Control System (VCS) for managing changes in source code, as well as other types of files (eg. html) and file structures in Git repositories. It allows developers to collaborate on projects without conflict.

A Git repository is a .git/ folder inside a software development project. You can deploy Git locally, or use it via a hosted service, such as Github, Gitlab or Bitbucket.

One of the advantages of using pip together with Git is to install the latest commits of unreleased Python packages as branches from Github. Some examples of this are provided below.

First determine whether you have up-to-date versions of Python, pip, and Git. You can check which version of Python (if any) is installed, by entering the following command in a terminal or command window:

You can check if pip is already installed and up-to-date by entering the following command:

If either Python or pip is not installed or up-to-date, the simplest way to get an up-to-date Python version with pip for either Linux, MacOS or Windows, is to install Python 3.9 from ActiveState.

Before installing Git, you should first determine whether you have it installed by running the following git command:

Although MacOS comes with a command line tools installer that includes Git, Homebrew is the recommended option for macOS Git installation.

To install Homebrew, run the following script in your terminal:

Once Homebrew is installed, you can install Git with the following command:

To install Git for Windows, point your browser at https://git-scm.com/download/win. A download of the Windows Git installer will begin automatically. Once complete, you can double-click the installer and follow the steps.

Once Git is installed, your Git environment and configuration variables need to be customized with git config.

You can view your default Git configuration options with the following command:

Set your user name and email address. This is important because every Git commit uses this information:

This only needs to be done once on each computer, if you include the –global option.

After you have set your user name and email address, you can check your settings with the following command:

Once your Git identity has been configured, you can begin using Git to install Github branches.

The following command syntax can be used to install the default branch of a github project:

To install the latest commit of the Exchangelib package, run:

This feature is not yet available.

To pip install a specific version of a repository branch, enter:

in a requirements.txt file:

The Git clone command is used in cloning or downloading a Git project without installing it.

First navigate to the directory where you to locate the cloned repository, then enter:

Github Desktop is a Windows Github Git client for cloning. It has an SSH authentication option that requires a public SSH key. A link with directions is included. 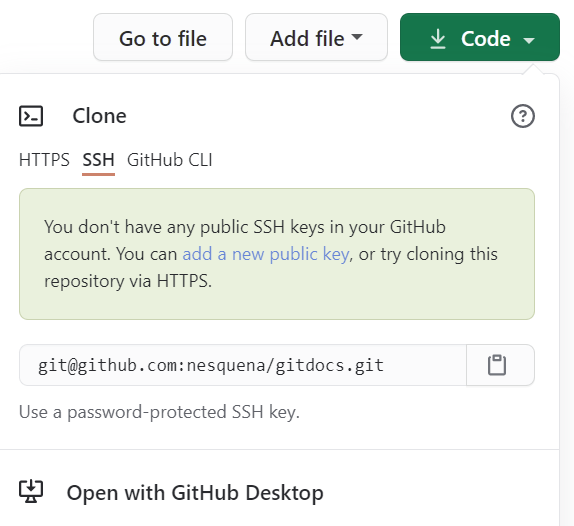 The following syntax will use SSH to install a Git repository that is not password protected: