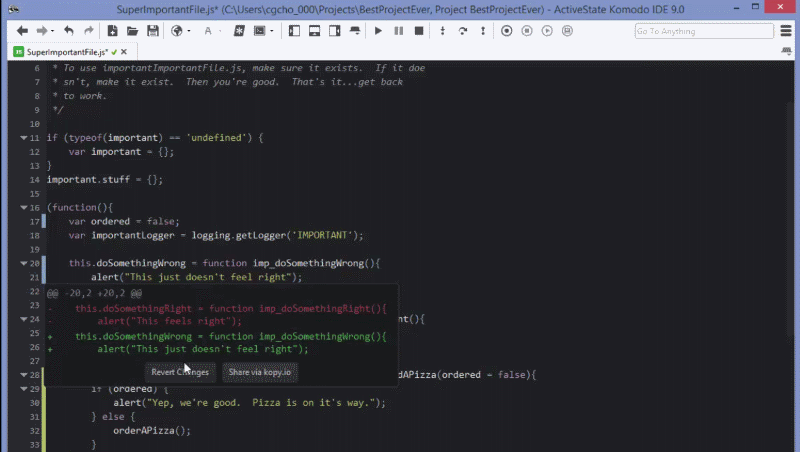 Workflow matters in development, and cutting down time and effort adds up quickly. We know this because – like most of you – we code every day.That’s why Komodo IDE 9 has a new Track Changes feature that saves you time.

So, what exactly is Komodo Track Changes? It’s a simple way of giving the individual developer major advantages in tracking and handling changes contextually. For instance:

Have you ever been writing code, got on a roll, implemented a few functions
that are all running fine, only to realize that one of those functions needs to be reverted to a previous state, but… You can’t quite remember what that state was? You hit Ctrl + Z until you’re back to the state of the function that you need; highlight, copy, Ctrl + Y (redo), oh whoops, did I just miss the Ctrl key and only hit “Y”?…No!

All that work gone! Head to desk. Fade to black…

I’ll admit it. I’ve done it more than once. Since we released Komodo 9 though, you no longer have to suffer this loss and confusion. The new Track Changes feature allows you to revert individual changes in a file, completely separate from your undo history. They can be based off all unsaved changes in a file, or if you’re using source code control, based off of your last commit.

Check out our screencast of Track Changes in action:

The tracker margin indicates lines with a green bar to show additions, red bars to show deletions, and blue to show in-place changes. Don’t like the defaults? These are customizable through your preferences under Color Scheme.

The tracker margin will include Source Code Control (SCC) changes when the file is under revision control. If the document is in SCC, the tracker margin shows changes against the last commit. Otherwise it shows the unsaved changes compared to what is on disk.

Track Changes feature is also in Komodo Edit, although it does not have the SCC components, so the margin will show unsaved changes to what’s on disk.

Turn the 5 minutes you just spent into 2 and get on to your next task quickly.

Now that you’ve seen it in action, try it out! For more great features in
Komodo IDE 9.

Give Komodo’s Track Changes a try today with the free 21-day trial download.