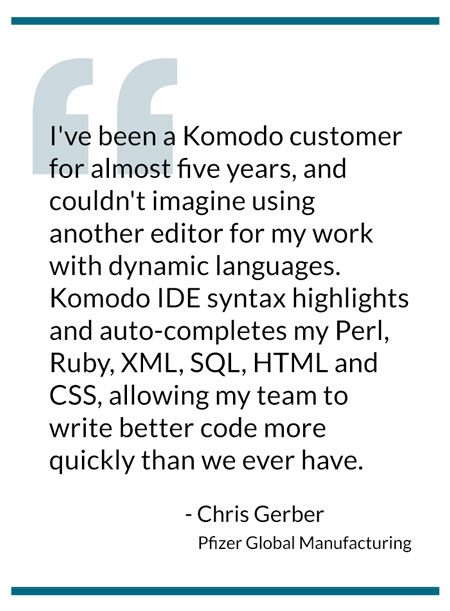 When you’re working on a project on your own, the power of Komodo IDE is obvious in the features: code intelligence, debugging, version control, great workflow and file management, and extensibility. The newest track changes, commando and markdown viewer add to the power of Komodo.

But have you considered Komodo for your whole team? I’m going to give you five great reasons why you should.

Support for All Major Languages. There is a reason we say “One IDE for All”…we cater to a polyglot world. Komodo IDE is the single IDE for all your major languages including Python, PHP, Go, Ruby, Perl, Tcl, NodeJS, HTML, CSS and JavaScript.
One license for all your languages means that when your projects change, your IDE doesn’t have to, no need to change IDEs and ramp up the team from scratch. In addition to supporting many languages, Komodo also supports a plethora of popular frameworks including Django, PHPUnit, Perl TAP, Python unittest, Ruby’s rake test, and more.

Real-Time Code Collaboration. Speed up team programming by editing with other users simultaneously. Code Collaboration shares changes with team members in real-time, with highlights to identify what was changed and who made the changes.

Available for All Major Operating Systems. According to Stack Overflow’s 2015 dev survey, the dev world is almost evenly split between Windows users and Mac/Linux. We see that even in our own office! So naturally Komodo IDE works on all three operating systems (and virtually every flavor of each). Your team can install their license on multiple machines (i.e. their work machine and laptop) so long as they are the only ones using the software on the machines. This gives your team flexibility to continue to work on their projects regardless of what computer they happen to be on.

Shared Tools Komodo’s Toolbox is a convenient interface for storing and organizing snippets of code, templates, macros, saved commands, and links. These useful tools can be stored in a user’s personal toolbox for easy use. Tools that are relevant to the whole team can be put into a Shared Toolbox, which can be kept on a network share, in source code control, or synced using Komodo’s own Publish feature.

Of course, Komodo also has debugging, code intelligence and advanced editing, coding standards, no Java dependencies and is extensible and customizable…all features which make it suitable for teams.

It’s not always easy to convince a team of programmers who are strongly attached to their favorite editors or operating systems to buy into the idea of a standardized development environment. But I hope I’ve shown you how Komodo IDE has a number of advantages over other editors and IDEs which make team adoption easier

Think Komodo might be the right solution for your team? Download the Komodo for Teams datasheet, try it for 21 days or pick up a Komodo 5-pack today and take advantage of our bonus offer on until June 30…we’ll send you 1 lb bag of Starbucks® Komodo Dragon® Blend coffee and 5 Komodo IDE 16 oz mugs.