We’ve completed most of the big feature work for Komodo IDE 9, and we’ll mainly
be focusing on bug fixes and polishing for the final release, so please help us
out by giving Komodo 9 beta a try and report any issues you run into.

We’ll also continue making nightly releases from here on out, to make it easy
for Komodo 9 pre-release users to keep up to date.

You can try Komodo IDE for free by creating an account on the ActiveState Platform.

Just remember, this is beta software – which means it’s not thoroughly hardened and will contain bugs… as such, please report any problems you run into on our bug tracker.

Here is a list of the major features and product changes made in Komodo 9: 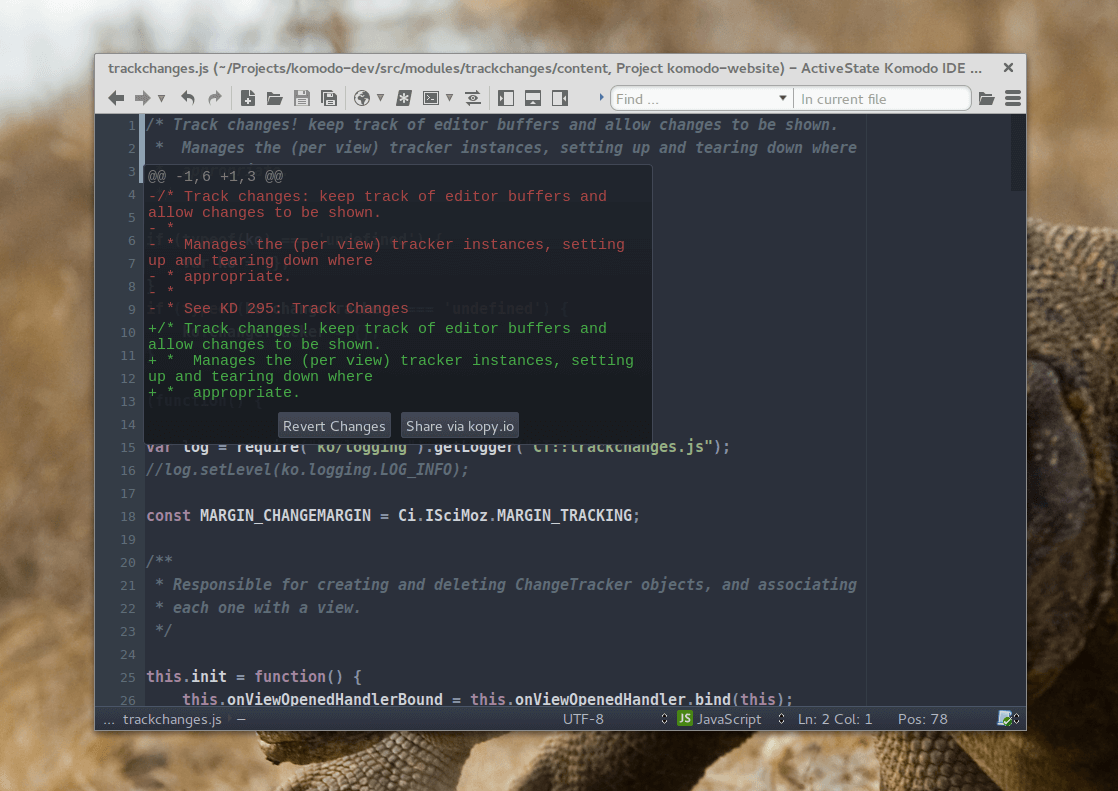 The editor has gained a new left margin – which highlights unsaved changes, as well as any uncommitted SCC changes. Clicking on the margin will show a diff dialog of the changes – as well as letting you revert individual changes! Sweet! 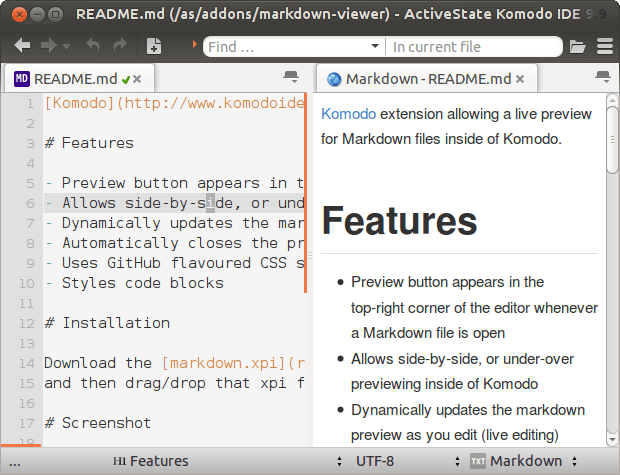 For Markdown files, Komodo provides a preview of the generated HTML directly within a Komodo split view and contents will dynamically update itself whenever you make a change to the Markdown text – it doesn’t even need to be saved. You can check out the markdown blog post for more details on this feature. 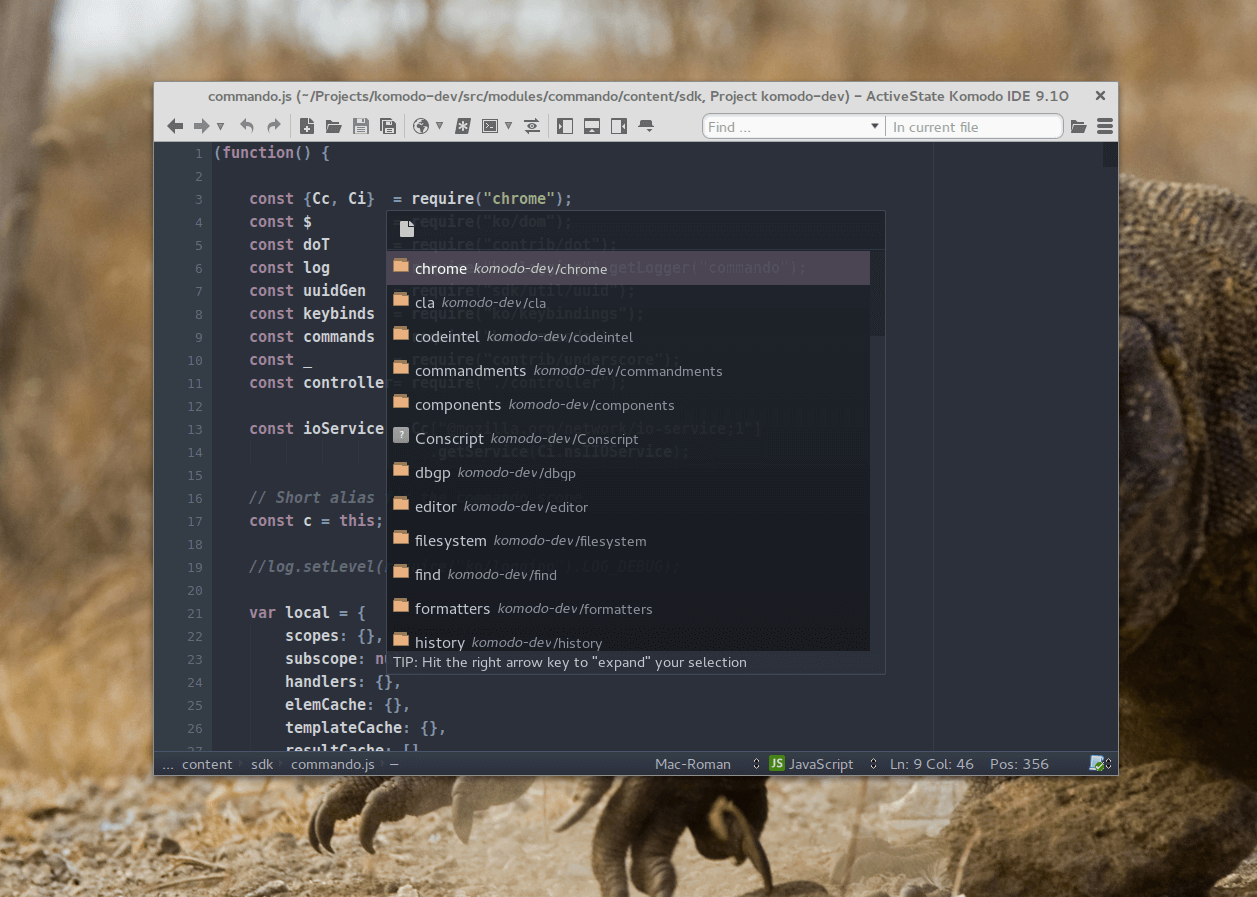 Now you can easily share snippets of code with other people (like pastebin)
directly from Komodo. Simple make a text selection and use the editor
right-click context menu and choose Share Code via Kopy.io. Even better is that Kopy.io supports client side encryption, so you can make those shared pastes more secure. 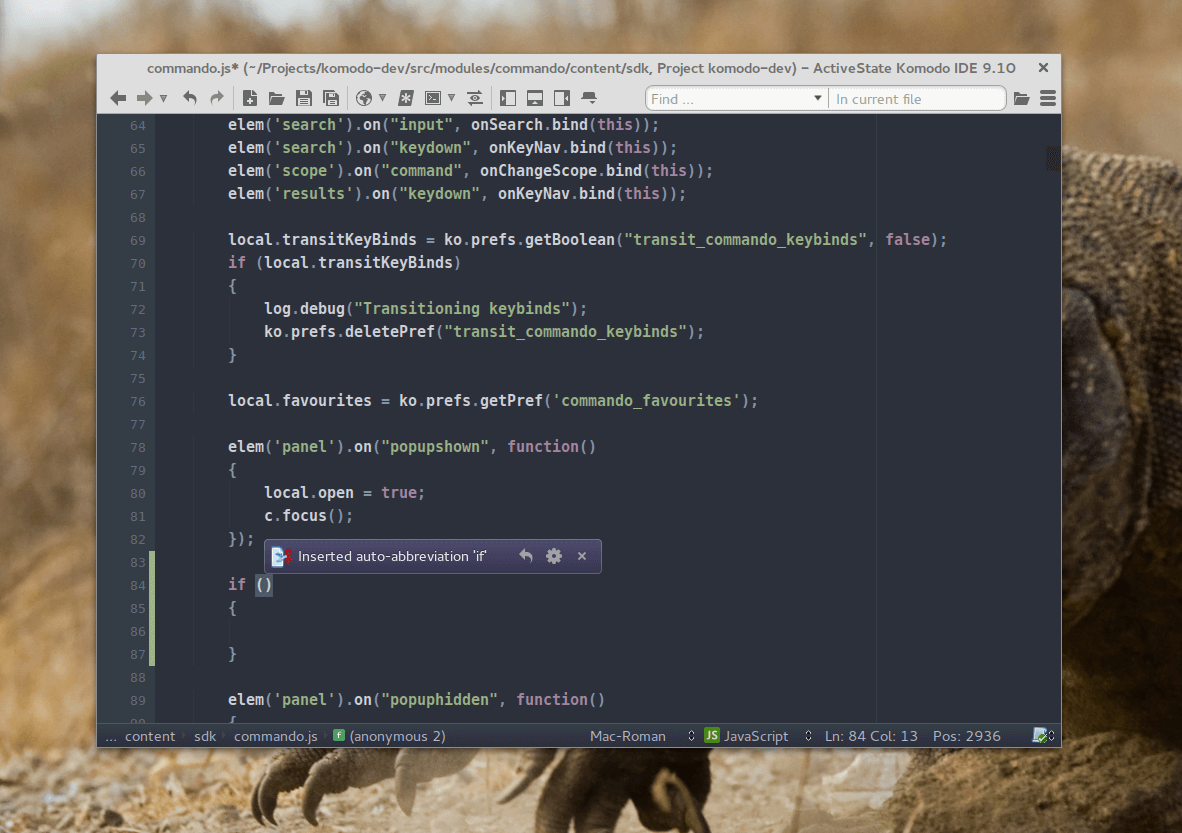 Notification messages shown to the user now appear in a separate popup panel that overlays the main Komodo editor window (previously they appeared in the Komodo statusbar). Komodo also has notification preferences, allowing you to control which messages get displayed in the popup panel.

Most of the icons in Komodo user interface have been updated to use improved images or to use a consistent style. We’ve tweaked the file icons, language icons, places icons, toolbox icons, preference page icons and code intelligence icons (completions, sections list, code browser).

We also added the ability to tweak the editor line height spacing, which is now saved in the color scheme preferences page.

The Komodo main menu bar (i.e. the File, Edit, …) is now hidden by default on Windows and Linux. You can use the Alt key to toggle the menu visibility, or force it be always displayed through the View > Toolbars menu.

Whilst the top-level menu is hidden, a unified menu button will be visible in the top-right of the Komodo toolbar, or if the toolbar is also hidden, then it will appear in the Komodo view status bar.

We’ve added support for PHP 5.6, with a new Xdebug module (for PHP debugging and Code Profiling), updates for keyword changes and updates to code intelligence to provide the latest API data for PHP 5.6.

We’ve added PEP 8 syntax checking – you can enable this in the Python Syntax Checking preferences. For those that don’t know – PEP 8 is the official Style Guide for Python Code.

We’ve been overhauling the Komodo APIs, to make it easier to load and access the
methods inside of Komodo. We’re now making use of CommonJS (aka Node.js)
require() calls to load individual modules – you can see the full list of
supported modules in the Komodo sdk directory. Examples of use and more
information can be found in the Komodo wiki.

There are other changes that Komodo Add-on developers should be aware of – we’ve been documenting these major changes on our Komodo wiki page.

We’ve made a bunch of performance tweaks to Komodo 9 already – with more to
follow. So far we’ve been concentrating on two main areas: