Places and Projects in Komodo 6 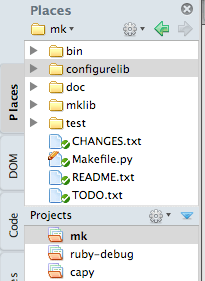 If you’re new to Komodo, you probably won’t know or care that the Project system has just undergone a huge change. The left sidebar now displays a file browser called Places that works pretty much like a regular file manager. Beneath it is a sub-pane called Projects, and with a little poking around you can quickly figure out how they work together.

If you’re used to using the old Komodo project system though, some of these things may come as a surprise. There are things you can do with the new system that you couldn’t do with the old one, and vice versa. On balance we think it’s much improved and definitely much more intuitive, but….

It just so happens that the things you can’t do are exactly the things I told people to try back in January 2009.

For my sins, I’ve been asked to write a bit about how to use the new interface. First, let’s look at the three things from my “Here’s what I do instead” list. I’ve changed the order as two are related.

This is now done for you. Project tools, formerly (and pedantically) referred to as “Toolbox/Project Components”, are now stored as JSON files in a special ‘.komodotools’ directory alongside the .komodoproject file. They appear in a special project-specific section of the Toolbox sidebar on the right, rather than mixed with the files and directories in the Projects sidebar.

This is much more intuitive for most people, but the implementation has a side-effect…

“Keep all my Komodo projects in one directory”

You probably shouldn’t do this now. You could put all your projects in one directory, but theyl would end up sharing the same project toolbox. This is probably not what you want if you’re actually using project-specific macros, snippets, and commands.

Saving the project file in the base directory of your project files, the usual use case for Komodo 5 “Live Projects”, is now much more important. I could have titled this post “Live Projects and why I’m forced to use them”, but I’m now used to this system and actually prefer it.

“Use multiple live folders at the top level”

This is a big one. You can’t do this now. A project has one base directory which it shows in the Places pane. A lot of experienced Komodo users have let us know that this has really messed with their flow. I know I used this technique, but I didn’t realize how many others did till the feedback started rolling in. If you’re one of these people, please know:

We’ve heard you, and we’re looking for ways to bring this functionality back with the Komodo 6 Places/Project system.

It might be in the form of a separate Projects sidebar that emulates the look and feel of the old Projects sidebar, or it might be linked/bookmarked project directories and file references displayed as nodes in the Places pane.

In the meantime there are a few tricks and new features that can ease the pain:

So if you’re having a hard time adjusting to the new project system, please do try these out. If you’re new to Komodo, these features are gravy.

I’d be remiss if I didn’t mention that Komodo IDE is free to try if you create an account on the Activestate Platform!