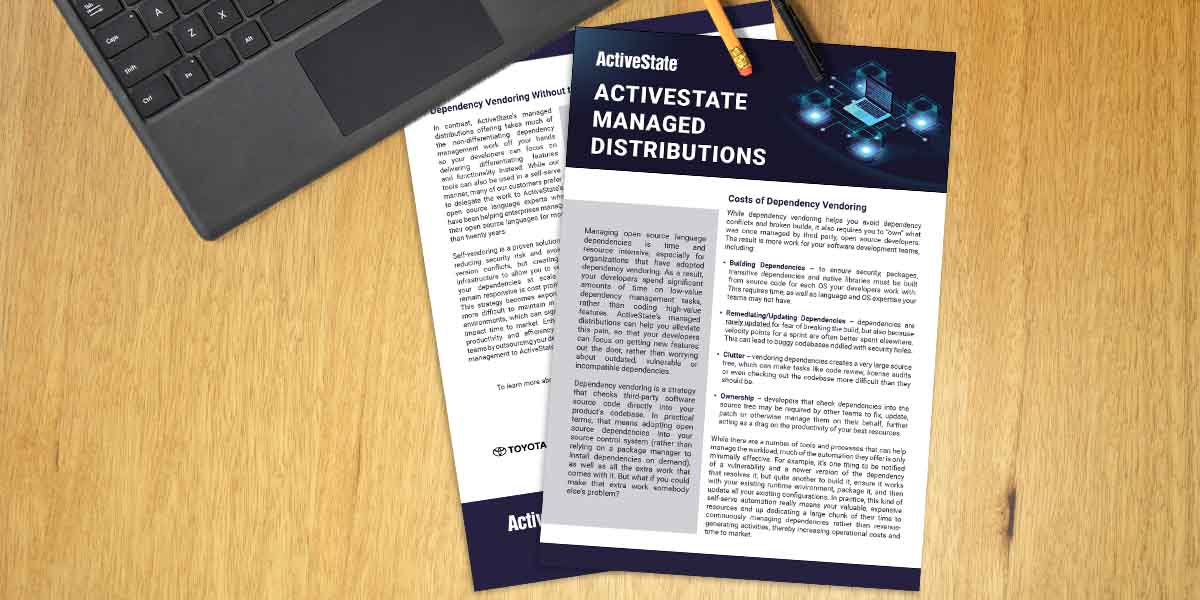 While dependency vendoring helps avoid dependency conflicts and broken builds, it introduces complexity that does not scale. Dependency automation tools help, but what if you could delegate all your dependency management tasks to ActiveState’s open source language experts? Download this datasheet to understand how outsourcing can free up your team.
Download Datasheet

Managing open source language dependencies is time and resource intensive, especially for organizations that have adopted dependency vendoring. As a result, your developers spend significant amounts of time on low-value dependency management tasks, rather than coding high-value features. ActiveState’s managed distributions can help you alleviate this pain, so that your developers can focus on getting new features out the door, rather than worrying about outdated, vulnerable or incompatible dependencies.

Dependency vendoring is a strategy that checks third-party software source code directly into your product’s codebase. In practical terms, that means adopting open source dependencies into your source control system (rather than relying on a package manager to install dependencies on demand), as well as all the extra work that comes with it. But what if you could make that extra work somebody else’s problem?

While dependency vendoring helps you avoid dependency conflicts and broken builds, it also requires you to “own” what was once managed by third party, open source developers. The result is more work for your software development teams, including:

While there are a number of tools and processes that can help manage the workload, much of the automation they offer is only minimally effective. For example, it’s one thing to be notified of a vulnerability and a newer version of the dependency that resolves it, but quite another to build it, ensure it works with your existing runtime environment, package it, and then update all your existing configurations. In practice, this kind of self-serve automation really means your valuable, expensive resources end up dedicating a large chunk of their time to continuously managing dependencies rather than revenue-generating activities, thereby increasing operational costs and time to market.

Dependency Vendoring Without the Work

In contrast, ActiveState’s managed distributions offering takes much of the non-differentiating dependency management work off your hands so your developers can focus on delivering differentiating features and functionality instead. While our tools can also be used in a self-serve manner, many of our customers prefer to delegate the work to ActiveState’s open source language experts who have been helping enterprises manage their open source languages for more than twenty years.

Self-vendoring is a proven solution for reducing security risk and avoiding version conflicts, but creating the infrastructure to allow you to vendor your dependencies at scale AND remain responsive is cost prohibitive. This strategy becomes exponentially more difficult to maintain in diverse environments, which can significantly impact time to market. Enhance the productivity and efficiency of your teams by outsourcing your dependency management to ActiveState. 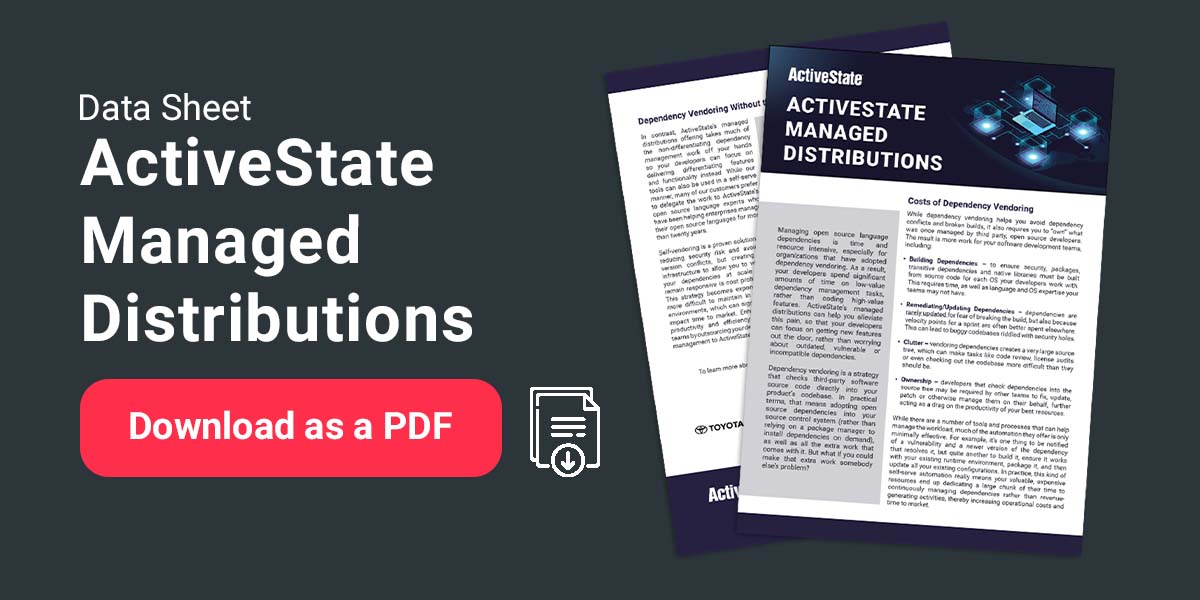