How to Manage Programming Language Upgrades and EOL 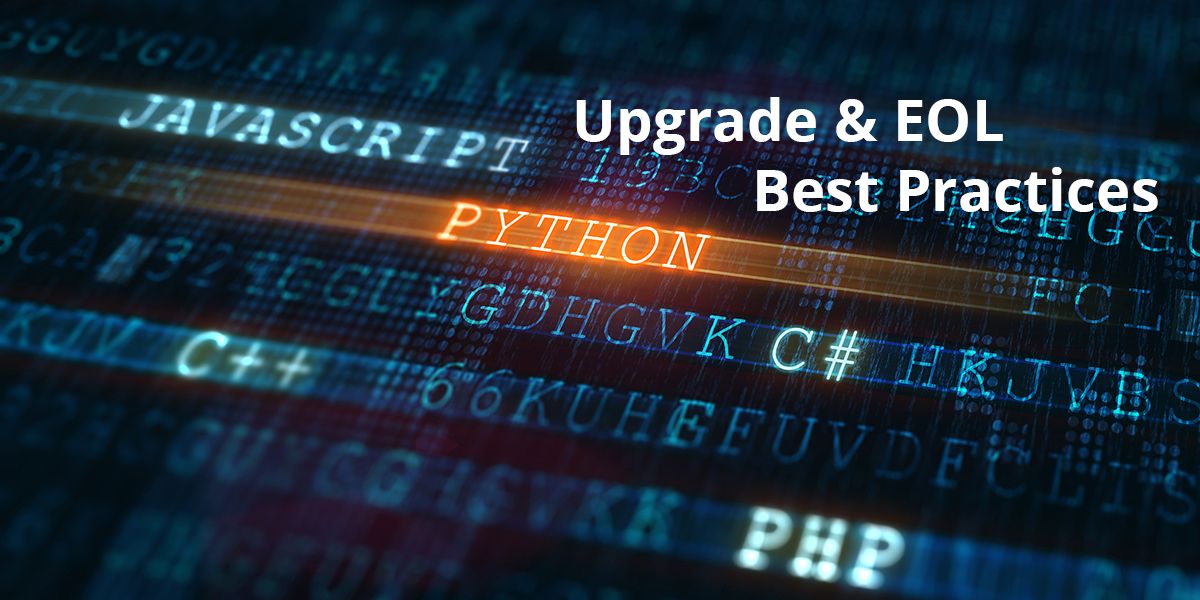 In a perfect world, organizations would be able to continuously update their software to ensure that it stays in sync with updates to programming languages as they evolve. In reality, however, updating your codebase to reflect version changes in programming languages is often easier said than done.

Simply determining when codebase changes are necessary due to a language update, let alone implementing those changes, can consume tremendous time and resources. That’s why it’s important to define a process for:

Having a process in place ensures that you can make strategic rather than ad hoc decisions about the time and resources required to ensure your software remains secure, supported and usable. This post explains how to design such a process, and which factors to consider when planning an upgrade or EOL strategy for the programming languages you depend on.

How to Know When to Upgrade a Codebase

As research has consistently shown, codebases are rarely if ever updated because:

The reality is that there’s rarely a good business case to move from one version of a programming language to another. In most cases, your software will gain no significant new functionality, and certainly no new differentiated features if your competition is also using the same language.

Typically, there are only two reasons to consider upgrading to a new version of a language:

But that doesn’t mean you can abdicate your responsibilities and ignore upgrades. You still need to have a process in place to:

Depending on the answer to each of these questions, you should be able to gauge whether an upgrade is necessary, whether it will likely pose a problem, and when to start planning.

What Does End-Of-Life Mean for Programming Languages?

In the context of programming languages, EOL represents the date when developers of a language will cease offering official support for it. Languages that have reached their EOL dates no longer receive new features or functionality, but more importantly, they no longer receive updates that resolve security vulnerabilities or fixes for bugs to correct performance issues.

To be clear, EOL status typically doesn’t mean the programming language as a whole is no longer supported. Rather, EOL dates correspond to specific versions or releases of a programming language. For example, Python version 3.7.13 will reach EOL status on June 27, 2023. Newer versions of Python will continue to be supported after that date, but Python 3.7.13 specifically will no longer be supported.

EOL dates vary widely between programming languages and releases. Typically, EOL dates are announced years in advance, and they are noted in documentation files. You can also refer to community-maintained sites like endoflife.date to search for EOL information.

How Do EOL Dates Impact Applications?

Just because the programming language in which you built your application is now EOL doesn’t mean your software will suddenly stop working. Technically speaking, it’s usually possible to continue running applications for years beyond EOL, just like you can run Windows XP today despite the fact that Microsoft stopped supporting it nearly a decade ago.

However, both business and technical risks continue to increase the longer you run the application beyond EOL. Some of those risks include:

Thus, while it may be technically possible to continue running an application that depends on an EOL language, doing so is far from ideal. And the longer you keep using an EOL language, the higher your risk of experiencing a security, performance, or compliance problem.

If you’ve decided you can live with the risks and want to continue running your application beyond EOL, there are really only two options (this is also true for upgrades):

If you choose the DIY option, you will need to dedicate extensive time and internal resources to deal with:

If you choose the outsource option, you will need to find a reliable partner and budget for their services, which should include:

While upgrades can typically be handled as and when they occur, ideally, you will want to explore EOL options well before the EOL date for your language so you can make informed decisions and allocate resources accordingly.

No matter how you approach it, programming language upgrades and EOL deadlines are a challenge. Neither of them have to become a serious security, performance, or compliance risk for your business, however, as long as you plan ahead. If so, there’s no need to abandon revenue generating applications regardless of the official EOL status of its underlying programming language.

ActiveState has been providing extended support for aging and EOL languages for decades. We help our customers upgrade and manage their codebase, freeing up their internal resources to work on value-add features/functionality rather than managing their open source languages. Our services include:

Want to understand how the ActiveState can help you manage your open source language upgrade and EOL needs? Contact Sales.